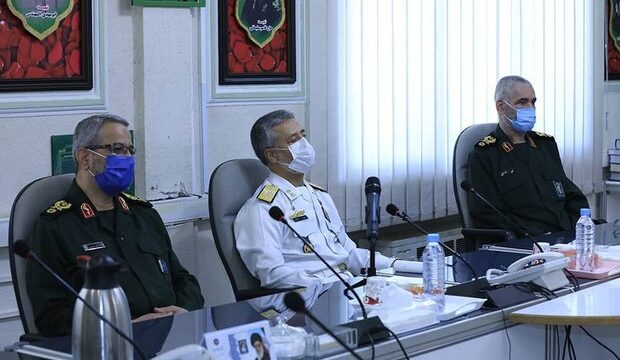 MNA – Deputy Coordinator of the Islamic Republic of Iran’s Army Rear Admiral Habibollah Sayyari said that there is a unity and amicable tie between Iran’s Army and Islamic Revolutionary Guards Corps in thwarting enemies’ plots.

Experience has shown that whenever there has been unity and amity in the country, Iran has been successful in all areas, whether in the field of Sacred Defense or confronting and resisting against Global Arrogance, Sayyari added.

The enemy is seeking to tarnish the solidarity between Armed Forces especially powerful Army and IRGC and tries to damage amicable ties existing between Army and IRGC forces, he highlighted.

Elsewhere in his remarks, Sayyari emphasized the need for setting up joint meetings between Army and IRGC for better organizing the 4th Anniversary of the Sacred Defense and reiterated, “Army of the Islamic Republic of Iran is ready to establish necessary cooperation and collaboration with IRGC for better organization of this ceremony in the best form possible.”

This meeting was held at the venue of IRGC Headquarters between commanders of Army and IRGC for coordinating the programs ahead of 40th anniversary of Sacred Defense.