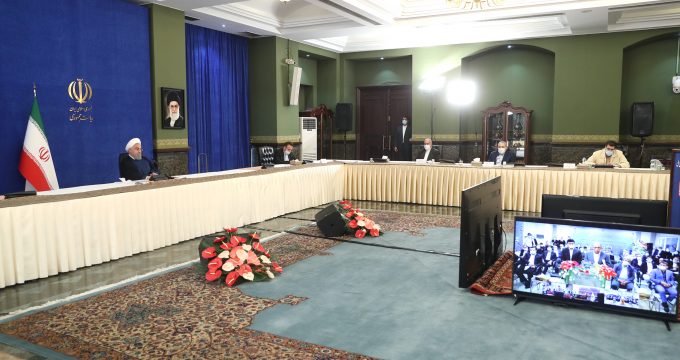 Tasnim – Iranian President Hassan Rouhani praised the people’s steadfastness in the face of the enemies’ economic pressures, saying the Iranian nation will not give in to such pressures.

“Just as it … has managed to stand up to the coronavirus and will succeed (in defeating it), the Iranian nation is standing up to the economic hardships imposed by the enemies through sanctions and will continue production and the development of the country,” Rouhani said on Thursday, addressing a ceremony held to inaugurate five major development, infrastructure and production projects in three provinces of the country.

“The enemies will not be able to force the great Iranian nation to surrender through their economic pressures.”

The nation is resisting well in the face of both the sanctions and the coronavirus pandemic, he added.

The president went on to say that the weekly launches of major projects proves that the country is on the path of production and development.

Such inaugurations will continue until the end of this administration, he stated.

The US has ratcheted up pressure on Iran since May 2018 after withdrawing from the 2015 nuclear deal, known as the Joint Comprehensive Plan of Action (JCPOA), and imposing sanctions on the country.

In comments earlier this month, Rouhani said Iran has overcome the US sanctions and successfully dealt with the economic war challenges by cutting reliance on the oil incomes.