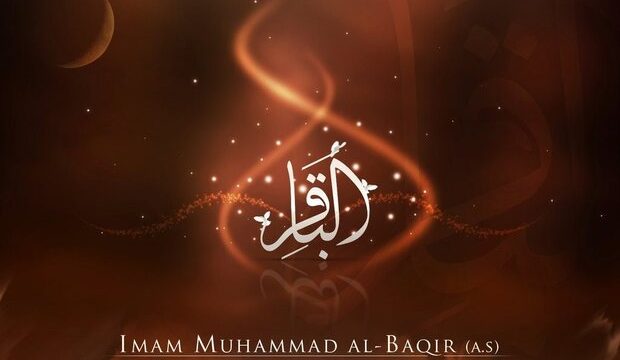 Heartfelt condolences to all Shia Muslims throughout the world on the martyrdom anniversary of Imam Muhammad al-Baqir (PBUH). Below is a biography of the Imam:

Imam Muhammad Baqir (PBUH) was born in the 57th year of the Hejira, on Friday the first day of the month of Rajab, in Medina. His honored father is Imam Sajjad (PBUH) and his revered mother, Fatima, daughter of Imam Hasan (PBUH). He was the only Imam who was connected to Hazrat Fatima (SA) from both the side of the Mother and the Father. Imam Sajjad (PBUH), according to the command of Allah and the decree of the Prophet (PBUH), appointed his son, Imam Muhammad Baqir (PBUH), to Imamate and leadership of the people in the 95 A.H. He remained Imam for the rest of his life until 114 A.H. and the total period of his Imamate is 19 years.

Baqir is a derivate of the word “Baqara” which means to open up or to expand. Imam Mohammad Baqir (PBUH) was named as such since he introduced and spread the knowledge and teachings of various dimensions and implemented the knowledge streams in a manner which had never been seen earlier. Imam Muhammad Baqir (PBUH) instructed people in percepts of religion, taught exegesis of Quran, taught them the ethics of life, and used to strive very hard to educate culture and guide the people. During the course of his life, he taught the people thousands of theological and religious principles, as well as scientific subjects, and his teachings have been handled down to us.

Imam Mohammad Baqir (PBUH) was about two and a half years old when he had to accompany Imam Hussein (PBUH) and the rest of his family members on the journey to Karbala. After the tiring journey from Medina to Karbala, he witnessed the shocking and tragic events of Karbala and then the heart-rupturing events in Syria and Iraq. After one year of detention in Damascus, he returned in 62 A.H. to Medina when he was 4 years old.

His Martyrdom (Departure) and burial

In 100 A.H., Hasham bin Abdul Malik became the Caliph. He was a known enemy of the Ahl al-Bayt and he did not waste any opportunity to bring hardship to the Ahl al-Bayt. Allame Majlisi writes that during the last days of his caliphate, Hasham came to Mecca for Hajj. Imam Mohammad Baqir (PBUH) and his son Imam Jafar Sadiq (PBUH) were also present. Hasham was informed that Imam Jafar Sadiq (PBUH) delivered a sermon among the Hajis that he and his father were Allah’s vicegerent and His command on earth and whoever was their friend and well-wisher will go to heaven and whoever is their enemy will be destined to hell. This infuriated Hasham and when he reached Damascus, he ordered the governor of Medina, Ibrahim bin Walid to send the two Imams (PBUH) to his court. Hasham had planned to malign the Imams in his court but the Imams (PBUH) overturned his plans which further ignited his enmity and he ordered the Imams (PBUH) to be jailed. While in the jail, Imam Mohammad Baqir (PBUH) gave sermons to the other prisoners which created an atmosphere of great enthusiasm and devotion towards the Imam (PBUH) and against Hasham and sensing the gravity of the situation and the risk of a revolt, Hasham ordered the release of the Imam (PBUH). He then ordered the governor of Medina that Imam Mohammad Baqir (PBUH) should be poisoned as he is becoming a constant threat (Jala-ul-Ayoon Page 262). The governor of Medina – Ibrahim bin Walid carried out the orders and poisoned the Imam (PBUH) in 114 A.H.

Imam Muhammad Baqir (PBUH), lived in this world for a period of 57 years, and in the 114th year of the Hijra, on the seventh day of the month of Zil-Hijjah, in Medina he left this world. His body was buried in Baqi cemetery alongside the graves of Imam Hasan (PBUH) and Imam Sajjad (PBUH) in Medina.

“Our Shias fear Allah and obey Him. They are humble and pious. They pay the trust. They praise Allah very much. They perform prayers and fasting. They obey their parents. They take care of the poor neighbors, the needy, the debtors, and the orphans. They are truthful in talking. They recite the Qur’an. They hold back their tongues from (speaking against) people except good. Thus, they are the custodians of their tribes over all things.” (Tuhaf al-Uqool)

“Your strong one should help your weak one. Your rich one should be kind to your poor one. The man should be loyal to his brother as he is loyal to himself. Keep our secrets. Do not force the people to follow us. Consider carefully our affair and what has been mentioned on our authority. If you find it in agreement with the Qur’an, then put it into effect. If you find it contrary to the Qur’an, then leave it. If you doubt the affair, then stop and ask us to explain it to you.” (Diya al-Amilin)

“The Shias of Ali, peace be on him, sacrifice their lives for our authority. They love each other, for they love us. They visit each other to enliven our affair. When they become angry, they do not do wrong. When they are pleased, they do not go too far (in pleasure). They are a blessing for him who is their neighbor them. And they are peace for him who associates with them.” (Tuhaf al-Uqool)

Imam Muhammad ibn `Ali ibn al-Husayn had the title of Baqir, that is to say ‘One who analyzes’. He was called Baqir al-`Ulum meaning one who analyzes the knowledge. A Christian, in a mockery and ironic way playing on words of Baqir, misinterpreted to Baqara called him, “You are Baqara (cow)!” Without expressing any annoyance or anger, the Imam replied calmly, “No, I am not baqara but I am Baqir.” The Christian said, “You are the son of a lady-cook.” The Imam said in reply, “It was her job, which is not considered an insult or disgrace to her personality.” The Christian said, “Your mother was black, immodest and had an abusive tongue.” The Imam said, “If whatever you attribute to my mother is true, I pray Allah to forgive her and absolve her sins, and if it is a lie, may Allah forgive you for your lies and slander.”

Observing such a clemency from a person who had the authority to submit a non-Muslim to different persecutions was sufficient to provoke a revolution in the soul of the Christian and invite him towards Islam. Later on, he embraced Islam. [ Al-Manaqib: 207/4.]

Work is Obedience to Allah

Imam Baqir (PBUH) thought that work was obedience to Allah. So, he himself cultivated his own land. Mohammed ibn al-Munzir said: I went out to one of the suburbs of Medina. There I met Abu Jafar (al-Baqir), peace be on him. He was a well-built man and he was working hard on his farm in a hot weather. So, I said to myself: Glory belongs to Allah. Here is a venerable leader of Quraysh out at this time and in these conditions seeking worldly (advantage). I must warn him. So, I approached him and greeted him. He returned my greeting. The sweat was pouring down him. I said to him: May Allah make you righteous, does a venerable leader of Quraysh go out at this hour for worldly (advantage)? What would you do if death came upon you at this hour?

However, the Imam answered him with Islamic words: Let death come upon me when I am obedient to Allah, the great and Almighty. I work to prevent my soul and my family from you and the people. I fear death when it comes upon me and I am disobedient to Allah.

So, Mohammed felt shame. He was unable to answer the Imam. Thus, he said to him: You are right. May Allah have mercy on you. I wanted to warn you, but you have warned me.

– He, peace be upon him, said: He for whom Allah does not make a preacher from his own self, the preaching of people does not avail him.

– He, peace be upon him, said: He whose tongue is truthful, his acts grow. He whose intention is good, his daily-bread increases. He whose kindness to his family is good, Allah prolongs his life.

– He, peace be upon him, said: The best worship is the abstinence of the private parts and the abdomen.

– He, peace be upon him, said: Regard the good deed as small. Do it quickly, and conceal it.