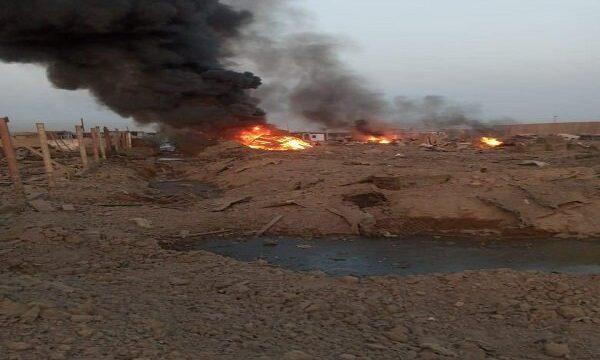 Two explosions reported at military base in Baghdad

MNA – According to reports two explosions have hit Al-Saqr military base in Baghdad on Sunday night.

The base is hosting Hashd al-Shaabi and the police forces of Iraq.

Iraq’s Security Media Cell said in a statement that two different explosions took place at the Al-Saqr military base on the Baghdad-Hillah road, according to Anadolu. The statement did not give information about the source of the explosions.

Intensive security measures were taken around the military base in the capital, it added.

Images of the explosion were shared on social media.

Meanwhile, Alsumaria quoted a security official as saying that according to initial information, explosions have happened at an ammunition bunker.

The explosions come as the United States has ramped up efforts to weaken the Iraqi Hashd al-Sha’abi. US assassinated the force’s commander Abu Mahdi al-Muhandis along with Iran’s Quds Force commander Lieutenant General Soleimani back in January.