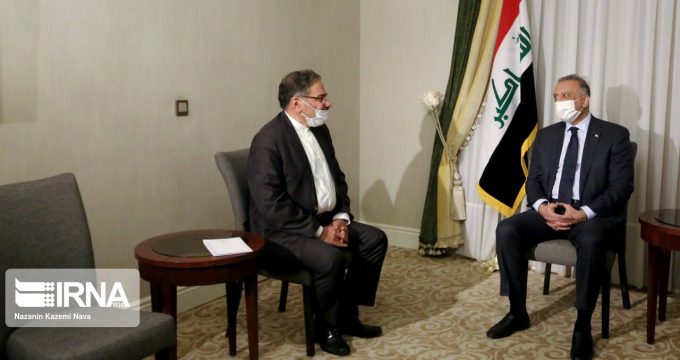 IRNA – Special aide to Majlis Speaker Hossein Amir-Abdollahian says that the recent visit of Iraqi Prime Minister Mustafa al-Kadhimi to Iran was an indication of depth of relations between the two countries.

Hossein Amir-Abdollahian made the remarks at a TV program on Saturday evening.

Iranian and Iraqi people and officials have mutual understanding about their social, religious and cultural commonalities, Amir-Abollahian said.

Elaborating on the level of Tehran-Baghdad ties, the official said that Iran and Iraq have witnessed significant growth in trade exchange.

Trade between Tehran and Baghdad stood at 14 billion dollars a year, while worth of Iran’s cooperation with Europe does not reach even to three billion dollars in the current year, the official added.

Trade ties between Tehran and Baghdad have even made the US officials extend sanctions waiver which allows Iraq to import from Iran at a time when the US has exposed Iran to maximum pressure, Amir-Abdollahian noted, adding that the two countries must enjoy the privilege.

About the visit of al-Kadhimi to Tehran and his meeting with top Iranian officials including Supreme Leader of the Islamic Revolution, Amir-Abdollahian said it took place while the US has been putting pressure on world countries including Iraq to decrease level of economic cooperation with Iran.

Despite all those pressures, the Iraqi premier along with eight Iraqi ministers visited Iran, he added.

He noted that Iraq with good geopolitical and geo-strategic position in West Asia is an important neighbor whose ties with Iran can be complementary as the two enjoy considerable commonalities.

He said that when the Supreme Leader received the Iraqi premier and his delegation, His excellency helped spread an important message of support, brotherhood and friendship.

At present, the Iraqis have arrived at a conclusion that Iran has helped them at a time when the US killed the Iraqi youth, fanned the flames of insecurity and managed the terrorists in the Iraqi soil to serve the US interests, the official stated.

He said that the Iraqi people will not forget beautiful scenes of help created by Iran to export gas and electricity to their country in difficult situation.

Lt General Soleimani was assassinated by the US terrorist attack on motorcade of Iranian Qods Force Commander General Soleimani and his companions including the Iraqi Commander of Iraqi Mobilization Forces Abdul Mahdi at Baghdad airport in January, 2020.

When the Supreme Leader in the meeting with al-Kadhimi talks about the assassination of Lt General Soleimani even after six months, it means that revenge is coming, he said, stressing that the meeting had an important message for Iraq, the region and the United States.

At a time when the US tries to put maximum pressure on people, Iran makes use of political, economic, social, strategic and cultural relations with Iraq to promote welfare of the both nations and ensure regional security, Amir-Abdollahian underlined.

He said that Iran and Iraq enjoy considerable capacities for cooperation, and Tehran has had good ties with its neighbors including Baghdad while Europe has been unable to be faithful to its commitments.

He further underlined that the US cannot tolerate good cooperation between Tehran and Beijing, Tehran and Moscow and Tehran and Baghdad and some other neighboring states.

Speaking about the recent US move to threaten the Iranian passenger plane over the Syrian airspace, the official said it did not happen accidentally.

Such provocative measures to threaten the safety of passengers and civilians will cause serious consequences for the United States, he added.

Iran’s Mahan Air passenger plane was on route to Beirut, Lebanon, when it was threatened by two US military jets on Syrian airspace on Thursday night (July 23).

Of course, Iran will take legal measures to pursue the case, he stressed.

Asked about the stance picked by the Zionist regime of Israel on the issue, Amir-Abdollahian said the regime denied any threat to the Iranian plane and this shows its fear.

Turning to the issue of presence of the US forces in Syria, the official said such presence amounts to occupation as it is based on no agreement with the Syrian government.

In a related development, Syria’s Permanent Representative to the United Nationa Bashar al-Jaafari told IRNA on Friday that the presence of the US in Syria is “occupation.”

About the 25-year draft document for comprehensive cooperation between Iran and China, the official said Iran has right to choose between several alternatives, so the country is keen to have relations with China, Russia and neighbors in the Persian Gulf region.

He stressed that Iran has made door open even for Saudi Arabia as a neighbor.

At the end of his remarks, the official censured smear campaign which is aimed at putting more pressure on “our people”.