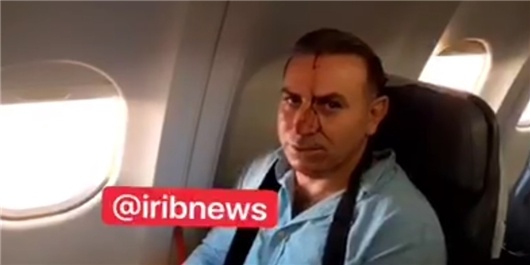 FNA – Several passengers were injured after two hostile US army fighter jets came close to an Iranian passenger plane over the Syrian airspace, forcing the pilot to make a sudden change of direction and altitude to avoid a collision.

Initial reports said two Israeli fighter jets approached a Mahan Air Tehran-Beirut flight over the Syrian sky in a highly risky move and the captain of the Iranian passenger plane was forced to make a sudden change of direction and altitude, causing several injuries.

While Western and Israeli media, including Reuters and Jerusalem Post, said the hostile aircraft were Israeli planes, the Israeli army denied the reports.

Yet, the captain of Mahan Air Flight No. 1152 later said the pilots of the two hostile planes have identified themselves as US army pilots during a radio contact.

Iranian Foreign Ministry Spokesman Seyed Abbas Mousavi said Iran’s Ambassador to the UN Majid Takht-Ravanchi has informed the UN Secretary-General Antonio Guterres of the incident, and warned that “in case of any incident for this plane on the way back home, the Islamic Republic of Iran will take the United States reponsible”.

Mahan Air told FNA later that several passengers have been wounded during the incident and have been taken to a hospital in Beirut and others have evacuated the plane sound and safe.

It said the passenger jetliner has refueled to fly back to Iran.

At 21:30 GMT, flight tacking websites showed that the plane has crossed Syria’s Al-Tanf border crossing with Iraq – the scene of the incident – on the way back home. At 22:30 GMT, reports said the jetliner has entered Iranian sky.

The Israeli air force has caused similar incidents over the Syrian sky in the last two years.

In February, an Airbus A320 passenger plane flying from Tehran to Damascus International Airport was forced to have an emergency landing at Russia’s Hmeimim air base near Latakia in Northwest Syria after coming under fire from Syrian air defenses during an Israeli airstrike on the Syrian capital.

In an official account of the incident, Russia accused the Israeli army of using the civilian flight carrying 172 passengers as a shield during its air strikes on targets in Syria on February 7.

“The recourse to civilian aircraft as cover or to block a riposte by Syrian forces during military air operations has become characteristic of the Israeli air force,” Russian Defense Ministry Spokesman Igor Konashenkov said in a statement a day later.

Israeli radars have “a clear view of the situation in the skies around Damascus airport”, Konashenkov said, accusing Israel of “making a total mockery of the lives of hundreds of innocent civilians”.

Less than a month later, two civilian airplanes bound for Qatar were used as cover by Israeli fighter jets launching missiles from Lebanese airspace against targets near the Syrian cities of Homs and Quneitra.

Syrian air defenses engaged incoming missiles shortly after midnight local time on March 5, both near Homs in Central Syria and Quneitra in the South, on the armistice line with the Israeli-occupied Golan Heights.

Following the attack, reports appeared that at least two flights – one passenger, one cargo – had to change course to avoid getting struck by air defense missiles.

The flights were tentatively identified as a Qatar cargo flight QR8294, bound for Doha from Basel, Switzerland. The other was QR419, a passenger plane that had taken off for Doha from Beirut, Lebanon, and made a loop around Tripoli before continuing its course South of Homs.