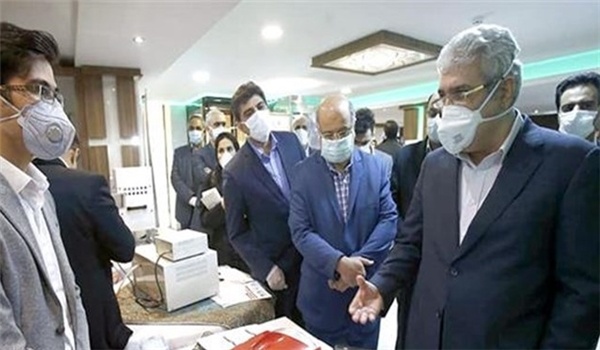 FNA – Iranian Vice-President for Science and Technology Sorena Sattari announced that the country produces everything needed to fight against COVID-19 virus epidemic.

“The knowledge-based companies have entered the scene very well, and many equipment used to fight against coronavirus were not produced in the country in the past, but today we are producing them at good levels, a sample of which is three-layer and filter-equipped masks,” Sattari said, addressing a meeting in the Central province of Isfahan on Tuesday evening.

He added that coronavirus test kits are mass-produced in the country now and they are even being exported, noting that Iran is also producing coronavirus-related medicine and nothing is imported from foreign states.

Sattari said that Iran will for the first time mass-produce influenza vaccine in the fall.

The Iranian health ministry announced on Tuesday that 2,625 new cases of coronavirus infection have been identified in the country during the past 24 hours, adding that 229 patients have passed away since yesterday.

“2,625 new patients infected with COVID-19 have been identified in the country during the past 24 hours and 1,977 patients have been hospitalized,” Iranian Health Ministry Spokeswoman Sima Sadat Lari said on Tuesday, adding, “The total number of the COVID-19 patients reached 278,827.”

“Unfortunately, 229 patients have lost their lives in the past 24 hours, increasing the number of the dead to 14,634,” Sadat Lari added.

She expressed pleasure that 242,351 cases infected with coronavirus have recovered or been discharged from hospitals, voicing concern that 3,589 patients are in critical conditions.

The spokeswoman also said that 2,201,958 diagnosis tests have been conducted across the country.

The Iranian foreign ministry has declared that despite Washington’s claims of cooperation to transfer drugs to Iran via the new Swiss-launched payment mechanism, the US is troubling the process amid the coronavirus outbreak in the country.

As the death toll from the virus surges, Iran intensifies its preventive safety measures. Closures of schools and most universities have been extended until further notice.