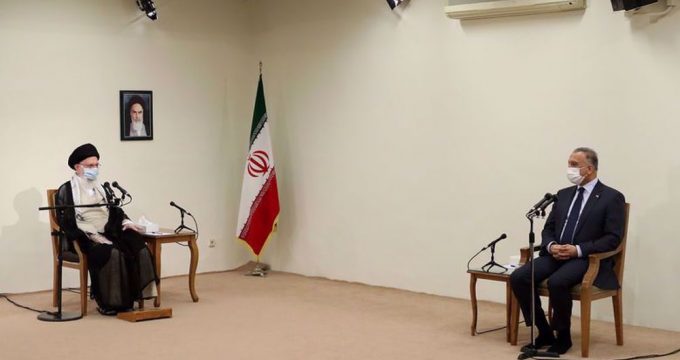 The contentious topic of the US military presence in Iraq was at the heart of a meeting between Iran’s Supreme Leader Ayatollah Ali Khamenei and visiting Iraqi Prime Minister Mustafa al-Kadhimi in Tehran July 21. “The Islamic Republic expects officials in Baghdad … to follow up on ousting Americans from Iraq because their presence sparks insecurity,” Ayatollah Khamenei told the Iraqi prime minister while stressing that Iran is not after interfering in US-Iraqi ties. Still, he advised “the Iraqi friends” to know the nature of the US government as “the enemy” whose presence “anywhere can be a source of corruption and destruction.”

The comments by the Iranian supreme leader came within wider diplomacy and lobbying in Baghdad for the expulsion of US forces from Iraqi soil, a policy Tehran has been intensifying after top Iranian Quds Force commander Maj. Gen. Qasem Soleimani was killed in a US drone strike outside Baghdad’s international airport in January. “They killed your guest … and openly confessed to their crime, and this is no minor issue,” Ayatollah Khamenei told Kadhimi, renewing the pledge that Tehran “will definitely respond to the Americans in kind” over the Soleimani killing.

According to Iranian state media reports, Kadhimi “expressed gratitude” to the Iranian leadership for standing by his nation in the fight against terrorism. However, he stopped short of making any mention of either the Soleimani case or the US military ouster from Iraq.