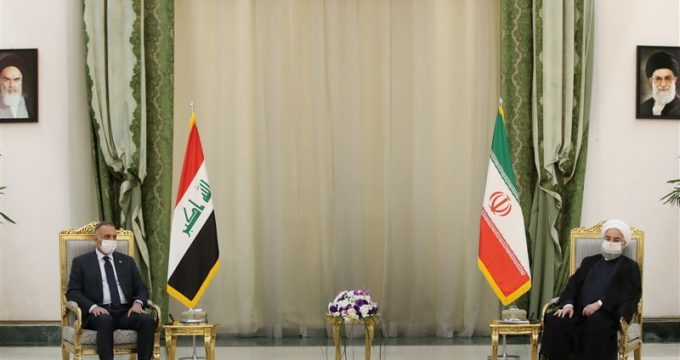 Tasnim – Iranian President Hassan Rouhani described Iraq as a strategic neighbor of the Islamic Republic, stressing that foreign parties will never be able to damage the brotherly relations between Tehran and Baghdad.

In a meeting with Iraqi Prime Minister Mustafa al-Kadhimi, held in Tehran on Tuesday, Rouhani said Iran attaches great significance to the protection of territorial integrity and security in Iraq, which he described as a major and strategic neighbor.

“The foreign forces will not be able to cause any harm and disruption to the brotherly relations between the two old neighbors,” the president underlined.

Rouhani also said that election of Mustafa al-Kadhimi as the prime minister of Iraq in the current special and tough conditions was a testimony to the trust that all Iraqi political groups have placed in him and to the deep unity and fraternity within the Iraqi society.

The importance that Iran and Iraq attach to the fate of each other is a great asset on the path to the promotion of relations and cooperation between the two Muslim neighbors, the president said.

He also expressed confidence that Iran and Iraq can weather the sever conditions in the wake of outbreak of the coronavirus pandemic with mutual cooperation.

The president further called for the immediate implementation of the agreements the two countries have signed in the past.

“The Islamic Republic of Iran would firmly support the decisive role that Iraq plays as a powerful Muslim and Arab country in the region to ensure peace and stability,” he concluded.

The visiting Iraqi premier, for his part, said Baghdad and Tehran have strategic relations, noting that the deep affection that people of the two countries have for each other is a solid backing for the strategic ties.

In the meeting, the Iranian president and the Iraqi prime minister agreed on the formation of a joint committee to pursue and expedite the implementation of the bilateral agreements.