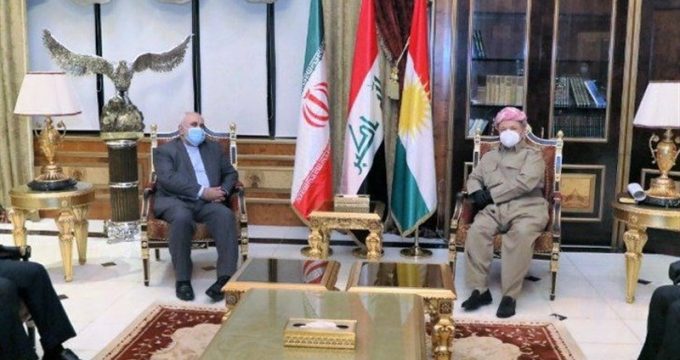 In a meeting with Iranian Foreign Minister Mohammad Javad Zarif in Erbil on Sunday, Barzani, the former President of the Kurdistan Region from 2005 to 2017 and the leader of the Kurdistan Democratic Party (KDP), pointed to strong bonds between the Iranian and Iraqi nations, and highlighted the unforgettable role played by Lt. General Qassem Soleimani in the defeat of Daesh terrorists.

Lt. General Soleimani, the former commander of the Quds Force of Iran’s Islamic Revolution Guards Corps, was assassinated in a US drone strike near Baghdad International Airport in January.

Barzani also gave Iran an assurance that the Iraqi Kurdistan region will never be used to threaten the Islamic Republic’s interests.

“The Kurdistan region will never turn into a place to threaten the interests and security of the Islamic Republic of Iran,” Barzani said in the Sunday meeting.

In an interview with Sky News Arabic in 2014, when Daesh overran the Kurdish-populated northern Iraqi town of Sinjar, then president of Iraqi Kurdish Regional Government (KRG) Masoud Barzani said Iran was the first country to provide Iraq’s embattled Kurdish region with weapons to fight off the terrorist group.

“We have to tell the truth. On our first night, when we were attacked by ISIL (Daesh), Iran sent us two airplanes full of weapons. This was a great help for that moment,” Barzani said at that time.

At a joint press conference with Zarif in Erbil back then, Barzani said, “We asked for weapons and Iran was the first country to provide us with weapons and ammunition.”

In the Sunday meeting held in the Iraqi Kurdistan region, Zarif said for his part that Tehran has always sought friendly relations between Baghdad and Erbil.

The two sides also stressed the need for expansion of business relations while observing health protocols in the wake of the COVID-19 outbreak.

Zarif arrived in Erbil on Sunday evening, after a trip to Baghdad where he held several meetings with high-ranking Iraqi officials including Prime Minister Mustafa al-Kadhimi and President Barham Salih.

The Iranian top diplomat’s meeting with PM al-Kadhimi was held ahead of the latter’s trip to Riyadh.