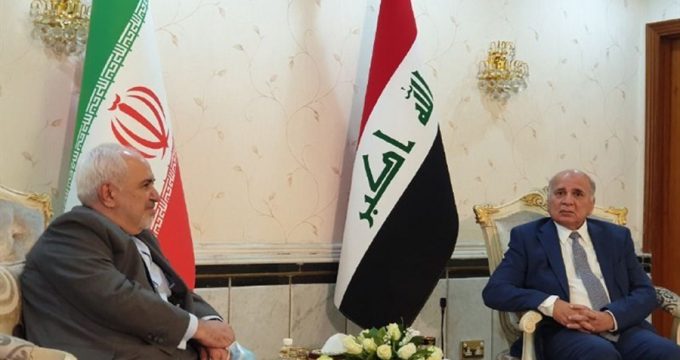 Tasnim – The foreign ministers of Iran and Iraq weighed plans at a meeting in Baghdad for the joint fight against terrorism and containment of the novel coronavirus.

Iranian Foreign Minister Mohammad Javad Zarif, who is in Iraq for a one-day visit, held two rounds of talks with his Iraqi counterpart Fuad Hussein on Sunday.

In the second round of the negotiations, they discussed various aspects of bilateral relations between Iran and Iraq, including the political, economic and security cooperation.

The two senior diplomats also talked about the Iraqi Prime Minister’s upcoming visit to Iran, the agreements signed during Iranian President Hassan Rouhani’s most recent visit to Iraq, plans to strengthen and intensify cooperation on legal prosecution for the martyrdom of Lt. General Qassem Soleimani and Abu Mahdi al-Muhandis, stronger economic and trade ties between the two countries –particularly holding of a virtual session of Joint Economic Commission,joint fight against terrorism, and plans to promote cooperation and share experiences in the battle with the coronavirus pandemic.

Zarif is going to visit Erbil in the afternoon at the invitation of President of the Iraqi Kurdistan Region Nechirvan Barzani.