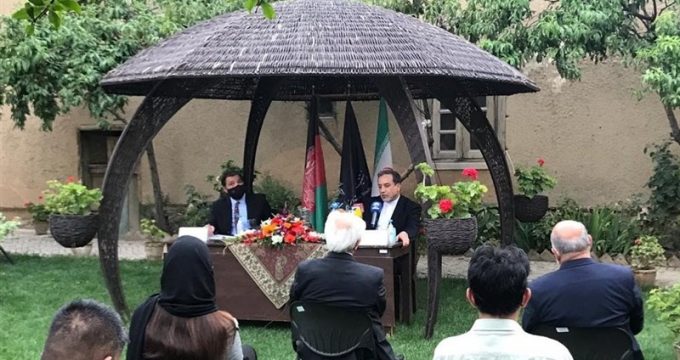 Tasnim – Iran’s Deputy Foreign Minister for Political Affairs Abbas Araqchi reiterated the country’s support for the peace process in Afghanistan, which he said should include all Afghan parties, including the Taliban.

Speaking at a meeting on the ‘Prospect of Iran-Afghanistan Ties; Challenges and Opportunities’, held in Kabul, Araqchi said various Afghan groups, such as the Taliban, should take part in the process of peace in Afghanistan.

“The Taliban are a reality in Afghanistan, and the peace negotiations should be held within the framework of this country’s Constitution and government in a calm and peaceful atmosphere,” he added.

The deputy minister also emphasized that Iran would by no means interfere in the internal affairs of Afghanistan, saying the Afghan nation and government should make the final decision about their fate.

As regards a document on defense and security cooperation between Tehran and Kabul, Araqchi said it will be part of a comprehensive cooperation agreement that would create eternal peace between the two countries.

Iran and Afghanistan will never participate in any coalition, union or alliance with a third country against each other, Araqchi added, saying the agreement -to be signed by the presidents after finalization- will entail cooperation in the fight against terrorism and drug trafficking.

“We consider only the current government of Afghanistan to be legitimate. As mentioned before, the peace process in Afghanistan should take the path of inclusive participation of various groups in Afghanistan,” he added.

He finally paid tribute to the Fatemiyoun Brigade for the battle against terrorism and ISIS terrorist group, saying without those voluntary Afghan forces fighting against Takfirism in Syria, Iran and Afghanistan had to confront terrorists in Tehran and Kabul.

Araqchi has travelled to Afghanistan heading a high-ranking delegation to follow up on the agreements already reached during a recent meeting to Tehran by Acting Foreign Minister of Afghanistan Hanif Atmar, especially to finalize the text of a comprehensive cooperation document between the two countries.

During his trip, Araqchi is to sit down for talks with other senior Afghan authorities as well.