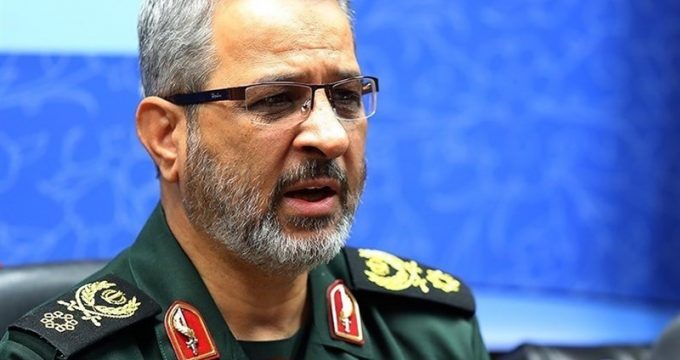 Tasnim – A senior Islamic Revolution Guards Corps (IRGC) commander shrugged off the Israeli psychological war against Iran, saying his main aspiration is to wipe out the “fake and usurping” Zionist regime that has failed in all arenas over the past decades.

In an article published on Sunday, Brigadier General Gholam Hossein Gheibparvar, the deputy commander of the Islamic Revolution Guards Corps in Imam Ali (AS) Central Security Headquarters dismissed the Israeli regime’s psychological war against Iran in the cyberspace.

The regime that chanted “From Nile to Euphrates” has ended in failure in all arenas over the past 40 years, the top commander said.

“Our cause is the elimination of the fake and usurping regime which has committed the most heinous crimes against humanity,” General Gheibparvar added.

He further advised the Zionist regime’s officials to think about completing and protecting the tall concrete wall they have constructed around themselves before the “children of Islam” suffocate Israel to death and wipe it out.

In a tweet in May ahead of the International Quds Day, Leader of the Islamic Revolution Ayatollah Seyed Ali Khamenei said, “Eliminating the Zionist regime doesn’t mean eliminating Jews. We aren’t against Jews. It means abolishing the imposed regime & Muslim, Christian & Jewish Palestinians choose their own govt & expel thugs like Netanyahu. This is ‘Eliminating Israel’ & it will happen.”

“The Zionist regime has proven it won’t abide by any treaty & understands no logic except force. The nature of the Zionist regime is incompatible with peace, because the Zionists seek to expand their territories & will certainly not be limited to what they have already occupied,” the Leader said.