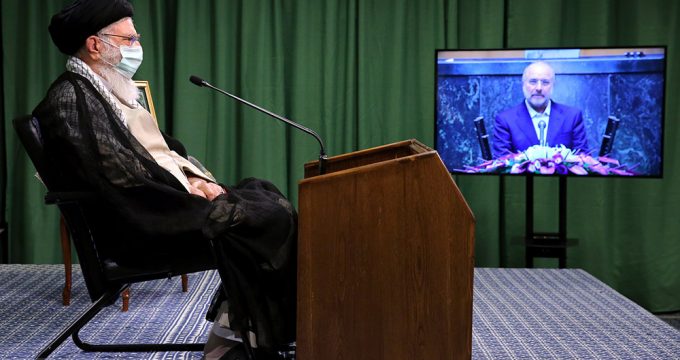 The US admits the failure of sanctions against Iran

Khamenei.ir – The Chairman, Representatives, and a group of staff members from the Islamic Consultative Assembly (Majlis) met with the Leader of the Islamic Revolution – Imam Khamenei – via video conference this morning, July 12, 2020.

The following is an excerpt of the statements his eminence made at this meeting:

“The 11th Majlis is one of the most powerful and most revolutionary since the Revolution. The presence of motivated, faithful, educated, effective youth along with a number of managers who have good executive experience has made this Majlis a very good and promising one.”

“The economic problems of a country are like a “disease.” But due to its strong endurance, Iran surely has the power to overcome this disease. Today the enemies admit that despite the severest sanctions and widespread pressures, they have failed to achieve their goals against Iran.”

“Creating thousands of knowledge-based firms, implementing hundreds of infrastructural projects, the continuous use of new plans and amazing advances in the military and space industries are the result of using just a “part” of the country’s vast potential. This should increase.”

“Part of the existing problems stems from the negligence of some current and former officials. If the spirit of national self-reliance and self-confidence grows, particularly among the youth, and false hopes for outside our borders lessens, I am sure economic problems will be resolved.”

“It’s important for the Majlis to attend to the main issues of the country and avoid side issues. In this situation, the main issues about the economy are: production, employment, curbing inflation, managing the monetary and financial system, and the economy’s independence from oil.”

“Concerning the society, the issues of housing, the marriage of the youth and ways to facilitate it, the fertility rate and preventing the country from moving toward an aging population, and managing cyberspace in the short and long term are among the main issues of the country.”

“It is the duty of all officials to have unity and harmony against the massive front of the raving enemies. Today, the enemy’s front, the most vicious and shameful part of which is the U.S. government, is using all its power to bring strong Iran to its knees.”