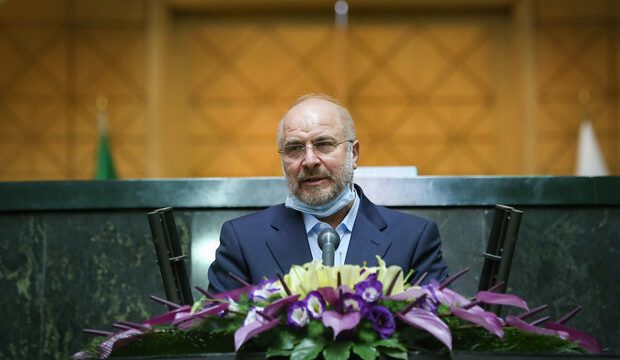 MNA – Parliament Speaker Mohammad Bagher Ghalibaf said that having a look to the East and diversifying trade partners of Iran are on the Parliament’s agenda as factors that can solve the country’s economic problems.

In a videoconference with the Leader of the Islamic Revolution Ayatollah Seyyed Ali Khamenei on Sunday, Parliament Speaker Mohammad Bagher Ghalibaf briefed on the approaches and plans of the 11th Parliament. This was the first meeting of lawmakers with the Leader after the new Parliament began its work in late May.

The Speaker noted that the new Parliament has aimed to become a ‘revolutionary and agile’ institute that would seek to resolve the country’s problems.

With appropriate planning and management, the country can achieve most of the aims described in the 20-year vision plan although just five years remain to the end of this period, he added.

The representative of Tehran in Parliament went on to say that all lawmakers have put on their agenda a ‘popular economy package’ that would transform the country’s economy in favor of people. The package consists of five topics namely reforming the country’s budget structure, renovating the country’s tax system, improving the livelihoods of the low-income groups, improving businesses and creating jobs, and finally, boosting foreign trade and non-oil exports.

Explaining the final topic, he said “Adopting a moderate foreign policy, especially after learning lessons from the failed experience of look to the West, developing respectful interaction with Europe, and building strong strategic relationships with the East, especially with China and Russia, can open various economic channels for supplying the country’s basic needs and raw materials and exporting domestic products to countries of Southwest, Central, and East Asia, and Indian subcontinent. This is essentially in my and Majlis’ agenda.”

“These measures will result in an improved geopolitical and geostrategic position of the Islamic Republic of Iran,” he said, adding that they “not only can neutralize the enemies’ pressures in the short term but create new power leverages for the Islamic Establishment against pressures while the enemy has openly decided to ramp up its pressure beyond Iran and target the whole Resistance Front with its economic blows.”

“The upgraded version of active resistance must include a cross-border program of resistance economy that would include all actors and countries affected by the tyranny of the Domination System and coordinate their capacities to solve common problems,” Ghalibaf added.

He assured the Iranian people that the Parliament will have ‘complete monitoring’ over international agreements to prevent any ‘dependency’ or ‘violation of people’s rights’.