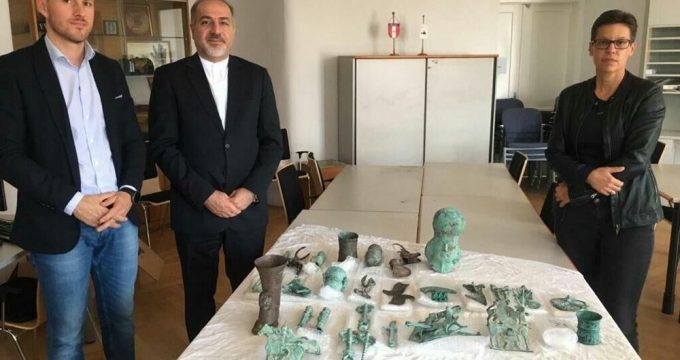 Tehran Times – A batch of Iranian ancient relics, which had been smuggled to Austria, was recovered and surrendered to a representative of the Islamic Republic in Vienna on Thursday.

“A number of antiquities belonging to Iran that were illegally smuggled into Austria were handed over to our country’s representative in Austria flowing a series of legal investigation and as the result of judicial assistance between the two countries and in cooperation with Interpol departments in the two countries,” ISNA reported on Friday.

The extradition session was attended by the head of the Vienna police criminal investigation department, the report said.

Among the seized objects, there are examples of bronze objects known as Lorestan’s pins, similar examples of which are being kept at the museums of Reza Abbasi and the National Museum of Iran.

Back in May, Iran’s Ministry of Cultural Heritage, Tourism, and Handicrafts called for the return of relics, which were discovered from a safety-deposit box of a bank in Austria last year.

“In Azar 1398 (the Iranian month falling on November 22 to December 21, 2019) through a telephone call from the head of Iran’s Interpol, the Ministry of Cultural Heritage, Tourism and Handicrafts was informed of the discovery and seizure of some ancient objects of Iranian origin form a safety-deposit box of a bank in Austria,” said Mohammad-Hassan Talebian, the deputy minister for cultural heritage affairs.

Talebian explained that “According to experts’ assessments and available photos, the [seized] relics certainly belong to the geographical and historical realm of Iran [and they date back to the] first millennium BC, as well as the Achaemenid and Sassanid era.”

“Based on national laws and international pacts such as the 1970 UNESCO Convention, to which Austria is a signatory, it is required that the items seized to be returned to the Islamic Republic of Iran as soon as possible.”

In April, Second Brigadier General Hadi Shirzad, the head of the Iranian Police’s international department, announced that the police “in a European country” have seized a cache of ancient Iranian relics hidden at a safety-deposit box of a bank.

“According to the Interpol, one of the banks in a European country intends to renovate and open the safe-deposit boxes inside the bank (previously informed the holders of the safe-deposit boxes that the bank intended to open them). Then, the bank finds out that one of the holders keeps some antiques of gold and silver in his/her box,” the senior police official added without mentioning the name of the European country.

“In coordination with the judicial authorities and with their assistance, a lawsuit has been prepared, translated, and submitted to that country. We are following the case through Interpol and diplomatic channels until the relics are back home,” Shirzad said.

The Achaemenid [Persian] Empire was the largest and most durable empire of its time. The empire stretched from Ethiopia, through Egypt, to Greece, to Anatolia (modern Turkey), Central Asia, and to India.

The Parthian Empire, also known as the Arsacid Empire, was a major Iranian political and cultural power in ancient Iran. The Parthians largely adopted the art, architecture, religious beliefs, and royal insignia of their culturally heterogeneous empire, which encompassed Persian, Hellenistic, and regional cultures.

The Sassanid era (224 CE–651) is of very high importance in Iranian history, under which Persian art and architecture experienced a general renaissance.