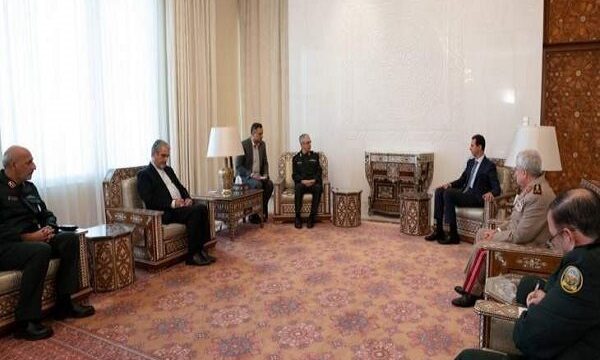 MNA – Chief of Staff for the Armed Forces of the Islamic Republic of Iran Major General Mohammad Bagheri met and held talks with President Bashar al-Assad in Damascus on Thursday.

During the meeting, the Syrian President expressed satisfaction with the results of the bilateral meetings between Iranian and Syrian officials and the signing of a memorandum of military and technical cooperation between the two countries.

The memorandum shows the level of strategic relations between Iran and Syria and is the result of years of joint cooperation to fight against terrorism in Syria, he added.

Bagheri, for his part, stressed the importance of the continuation of strengthening bilateral relations between the two nations in all fields, saying that it is in the interests of both countries.

Heading an Iranian delegation, Chief of Staff for the Armed Forces of the Islamic Republic of Iran Major General Mohammad Bagheri left Tehran to Damasus to hold talks with senior Syrian officials.

Bagheri and Syrian Minister of Defense Ali Abdullah Ayyoub signed an agreement on expanding military cooperation on Wednesday. The agreement emphasized the expansion of military and security cooperation between the two countries, the report added.

The two sides conferred on the latest development in Syria and stressed the need for the withdrawal of foreign forces from the country.