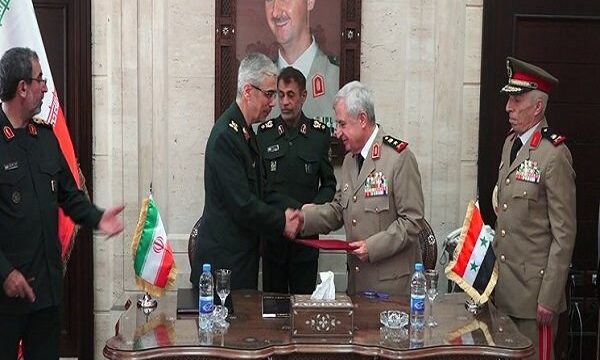 The Arabic-language al-Mayadeen news website quoted General Baqeri as saying after inking the agreement that Iran “will strengthen Syria’s air defense systems in line with the reinvigoration of military cooperation between the two countries”.

Elsewhere, he blasted Turkey for lack of commitment to its undertakings based on the Astana peace process to take out the terrorist groups from Syria, saying that Ankara’s problems will be settled through talks and agreement with the Syrian side and not by military deployment in Syria.

General Baqeri also said that the regional people and countries do not welcome the US presence in the region, and added, “The inked agreement will increase our determination for joint cooperation to confront the US pressures.”

General Ayyoub, for his part, said that if the US could bring Iran, Syria and the resistance front to its knees, certainly, it would not hesitate even one moment, adding that the cost of resistance is much less than surrendering.

Iran has on several occasions stressed that it will continue its military advisory role in Syria as long as the legal government in Damascus demands.

Also, Syrian President Bashar al-Assad underlined in June 2018 that his country would agree with setting up Iranian military bases in Syria if Tehran ever extended such a demand.

“There’s nothing to prevent establishment of such bases as long as Iran is an ally as is Russia,” President Assad said in an interview with the Arabic-language al-Alam news channel.

Asked if he would agree to the establishment of such bases, he said even his country might raise such a demand from Tehran. “We could ask for the existence of such forces to support us. Iran has never asked and does not have an interest except in fighting terrorism. But the evolution of the war made it necessary to develop the nature of this presence.”

“This happened as far as the Russians are concerned. In the beginning, Russian support, like Iranian support, was different from what it is today. The support for terrorism has developed internationally and globally when the Syrian Army confronted those terrorists, and with that Russian and Iranian military presence developed. At a certain stage, we found – with the Russians of course – that the existence of air bases was necessary to provide air support to the Syrian Army. And now, if we find, in cooperation, coordination, or dialogue with the Iranians, that there is a need for Iranian military bases, we will not hesitate. But now, Iranian support in its present form is good and effective,” he added.