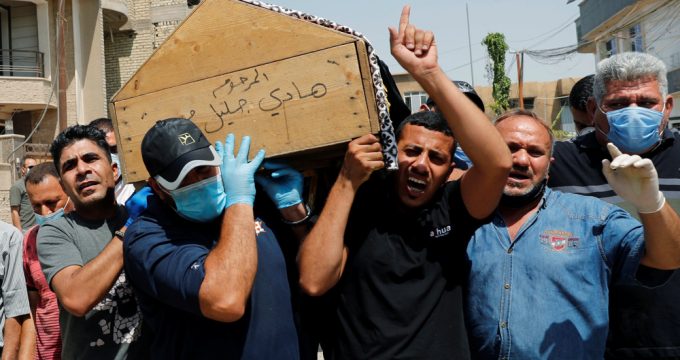 Press TV – A leading Iraqi security analyst and government advisor has been shot dead outside his home in the capital Baghdad, sparking public anger and a wave of condemnations from the country’s senior officials.

Three gunmen on two motorcycles fired at Hisham al-Hashemi, 47, from meters away on Monday, near his home in the Zayouna district, east of Baghdad, according to the investigator assigned to the killing.

A gunman then approached and shot him four times in the head at close range, he said.

A medical source at the hospital also confirmed that Hashemi had suffered “a hail of bullet wounds in several body parts.”

Some Iraqi media reports said Daesh had claimed responsibility for the act of terror via Twitter accounts affiliated with the Takfiri outfit.

Hashemi was known for his views and writings about politics, Daesh and the role of popular forces in Iraq. He was a respected security analyst who appeared regularly on state television and whose expertise was sought out by government officials, journalists and researchers.

According to an Iraqi government official, Hashemi worked as an advisor to former premier Haider al-Abadi and informally with the government of current Prime Minister Mustafa al-Kadhimi.

The assassination has triggered outrage among Iraqi elite, people, journalists and politicians.

The Iraqi Interior Ministry have called for the formation of an investigative committee into the incident.

It said in a statement that Interior Minister Othman al-Ghanmi had ordered the establishment of the committee under the chairmanship of the deputy director of the Iraqi Intelligence Service, adding that all checkpoints have been instructed to inspect certain types of motorcycles and arrest the drivers who carry weapons.

Prime Minister Mustafa al-Kadhemi said Hashemi was “a voice in support of our heroic forces in the fight against Daesh, and played a pivotal role in enriching the important political and security dialog in the country.”

He vowed that Baghdad would pursue the perpetrators of the crime and justly punish them.

“We will not allow assassinations to return to Iraq” under any circumstances, he noted in a statement.

Similarly, President Barham Salih took to Twitter to remind the country’s security services of their “duty is to arrest the perpetrators and bring them to justice.”

Parliament Speaker Mohammed al-Halbousi also urged “relevant government departments to arrest the perpetrators of the cowardly act as soon as possible” to prevent further kidnappings and assassinations of national figures.

“We demand that security forces follow up on this crime and detain the terrorists that assassinated Hashemi, who was considered one of the most prominent writers and experts on IS (Daesh) groups, and who had a huge role in exposing their secrets,” it said.

UN’s top official in Iraq Jeanine Hennis-Plasschaert slammed the killing as a “despicable act of cowardice.”

“Our heartfelt condolences to his family and loved ones. I call on the government to quickly identify the perpetrators and bring them to justice,” she tweeted.