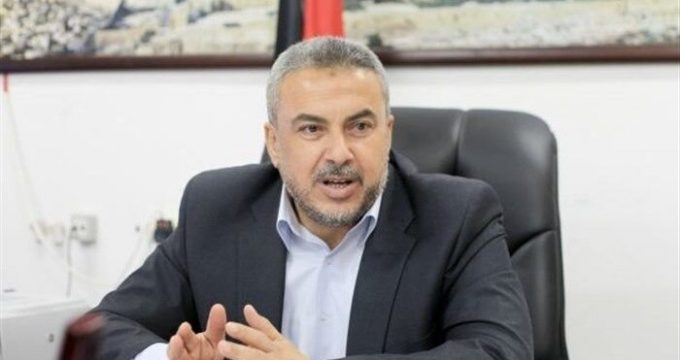 IRNA – Leader of Hamas Ismail Rezvan on Tuesday thanked Iran’s the Supreme Leader for his support in a message to chairman of the Hamas Political Bureau, Ismail Haniyeh.

Speaking to IRNA, Rezvan said Iran has always been one of the supporters of Resistance in Palestine and stressed the fact that Resistance movement is united against US-Israeli plots in the region.

He added that Haniyeh accords special respect to Iran’s Supreme Leader due to Ayatollah Khamenei’s unwavering support to the Palestinian cause.

We praise Iran’s position which indicates its full awareness of the Palestinian issue and also its continuous support of Palestine, he noted.

It shows that we are not alone in fighting a Zionist institution and an American project in the region, he reiterated.

We have taken the leadership of people in the sensitive situation of standing against the occupying Israeli regime, the Palestinian official said.

Iran’s Supreme Leader’s message amid the current sensitive situation in Palestine and immediate reaction of some organizations and supporters of Zionists indicated the fact that despite sanctions Iran will not back down from supporting Palestinian nation and the Resistance, he added.

Rezvan emphasized that Hamas Movement will move in Resistance path until the defeat of Zionists’ occupation, destroying ‘Deal of the Century’ and plot of West Bank annexation.

Theft of Palestinian land will not come true, even if we sacrifice our life, he noted.

We have achieved a tripartite unity for approving national plan to have an all-out confrontation by holding joint meeting between Hamas and Fatah.

Iran’s support will cause fear and confusion for the occupying Israeli regime, he said adding that Iran’s Leader message indicates unity among Resistance forces in the region.

The message is originated from Iran’s strategic and responsive stance showing that “we are not alone and it is the main issue for Iran and Palestine,” Rezvan said.

He urged the Palestinian government to stop coordinating with security systems in recognizing the Zionist regime.

The Supreme Leader wrote in response to the letter of the chairman of the Hamas Political Bureau, Ismail Haniyeh, that the Islamic Republic of Iran spares no efforts to support the oppressed people of Palestine and restore their rights.

Appreciating Haniyeh for his efforts, Ayatollah Khamenei said the desperate enemy has been heavily defeated and has decided to continue their expansionist goals through economic pressure and laying siege to Gaza Strip and the trick of negotiation and peace plan, but the Resistance and the people of Palestine will not yield to their threats and extortion as before, and they will tread the path of honor and pride.

The Supreme Leader said that exercising vigilance and unity will bring victory to the Palestinian liberation movement from the Israeli occupation and will thwart the ominous plots of the enemy.