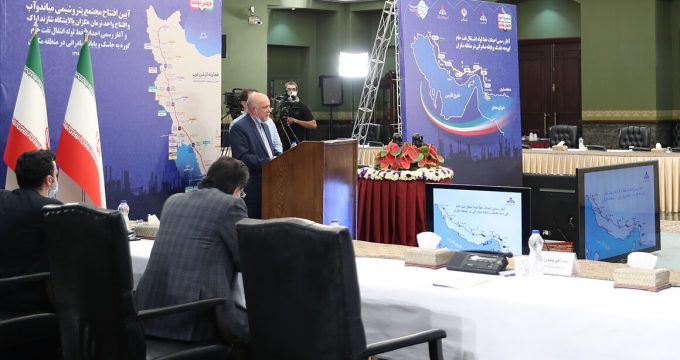 Addressing the ceremony, Minister of Petroleum Bijan Zangeneh said that the offshore activities of the South Pars gas field would be over this calendar year (started on 20 March 2020).

“The implementation of South Pars development projects was coincided with financial difficulties and we had to endure low oil prices,” he said.

Development of the South Pars gas field started in 1997. After 22 years, South Pars is in the final stage of development with the installation of 11B jacket. A total of 27 development phases have been defined for South Pars, whose completion would allow for the recovery of nearly 80 mcm/d of sour gas. This gas will be then processed to be injected into the national gas trunkline or to feed petrochemical plants.

Iran is currently recovering 700 mcm/d of gas from South Pars, which would reach 750 mcm/d by next March. The increase in gas recovery from South Pars comes at a time the US imposed tough sanctions on Iran’s petroleum industry following its unilateral withdrawal from the 2015 nuclear deal. Consequently, many companies stopped cooperating with Iran and France’s Total and China’s CNPCI pulled out of the SP11 project.

In 2017, Total agreed to develop SP11 at the head of a consortium comprising CNPCI and Petropars. However, following the restoration of sanctions, the two foreign companies quit. According to Zangeneh, the Total-led consortium had spent $100 million on the project before leaving Iran.

The project was then assigned to Petropars that has the experience of development other phases of South Pars. Petropars is a qualified Iranian company in oil and gas projects.

The SP11 project, worth more than $4 billion, is aimed at the recovery of 56 mcm/d of gas. Pressure compression technology is needed in this phase because South Pars would be faced with production decline in coming years. According to Zangeneh, $2.4 billion of the contract’s value was specifically for the compression platform.

Zangeneh said the South Pars gas field was a God-given blessing for the Iranian nation, adding that production from South Pars had increased from 280 mcm/d in 2013 to 700 mcm/d now. He added that another 50 mcm/d would be added to the giant field’s output this calendar year.

Zangeneh said Iran’s gas recovery was now proportionate to its share of South Pars which is shared with Qatar.

Zangeneh said South Pars had been developed in recent years in the midst of sanctions. He added that the brief period of no sanctions following the Iran nuclear deal allowed for importing huge quantities of necessary commodities.

He said that 17 phases of South Pars were incomplete when the Rouhani administration took office. “Now, all the incomplete phases except for the refinery of SP14 are now complete.”

Noting that all offshore activities will end in the current year, the minister said: “These activities have been done while we were faced with financial problems and we had no $100 oil. Of course, National Development Fund of Iran (NDFI) was of great help to us.”

He said that no production platform would be built for this jacket.

“With the installation of this jacket and drilling of five wells, it would possible to recover 14 mcm/d from this phase in 14 months,” he said.

Zangeneh said onshore and offshore pressure compression was being studied, adding that relevant studies would be completed in October or November to allow for decision-making.

“What’s more is that we will not be stopped by sanctions. We will go ahead despite all these sanctions and all of our projects including joint fields, the Goreh-Jask project, West Karoun development projects and petrochemical projects are active,” he added.

Hamid-Reza Masoudi, CEO of Petropars, said 350,000 persons-hours had been spent on building this jacket, which he said, was accident-free. He added that the jacket had been designed and built fully by Iranian designers, consultants and contractors.

He said that after the installation of this jacket, a drilling rig would be mounted for drilling five wells to allow for the recovery of 500 mcf/d of rich gas.

The SP11 development project in locations A and B is under way with each location having 12 wells and two platforms each with a production capacity of 1bcf/d.

According to planning, five wells would be first drilled in the location of Platform 11B for the recovery of 500 mcf/d of gas. Primary production from this platform is expected to start next year.

In order to accelerate the development of SP11, construction activities in the first location of gas production in this project are based on maximum use of available installations, spending minimum costs and allocating shortest possible time.