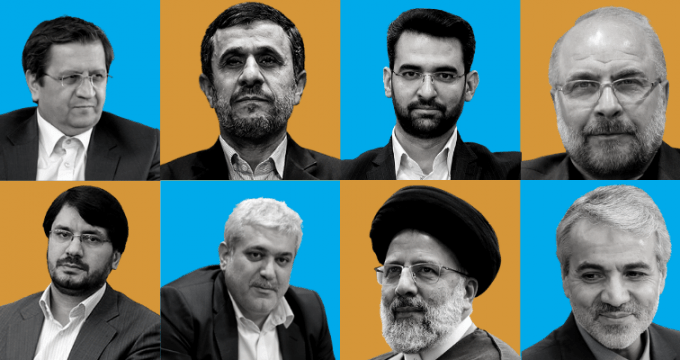 Bourse and Bazaar – With less than a year until Iran’s presidential election, political camps are making preparations for what is expected to be a watershed contest to decide who will succeed moderate president Hassan Rouhani.

The state of Iran’s economy will be the key issue for most Iranian voters, and by extension, there will be a fierce debate among hardline camps, which now control the parliament and the judiciary, as to whether the country should continue the pro-engagement politics introduced by Rouhani and his political allies following the 2013 election.

But alongside this political debate, another question has emerged—whether it is time for younger candidates to come to the fore.

“I have stressed time and again that I do believe in a young and religiously committed administration,” said Supreme Leader Ali Khamenei in a May 17 virtual meeting with representatives of student unions.

Khamenei, however, made it clear that the notion of a young government does not mean electing a president who is “say 32 years old.” Rather, Khamenei called for “an administration … within an age range capable of working hard, one that is not fatigued.”

The supreme leader’s speech has spurred new names to be added to the already long list of candidates expected to run for president. Iranian media have touted three rising figures who may be aiming to succeed Rouhani.

Topping the list of young candidates is Mohammad Javad Azari Jahromi, the country’s 39-year-old minister communications minister, who has positioned himself as a progressive technocrat. Jahromi has sought to earn the trust of younger Iranians by seeking to make his ministry more transparent and by vowing to protect access to social media platforms such as Instagram.

“Let them rest easy that I will not run for president,” Jahromi told reporters when asked whether his push for transparency was a stunt to gain popularity ahead of the election. Of course, Iranian politicians typically deny their ambitions for as long as possible, and Jahromi’s statements have not put an end to speculation that he is planning to run.

Another young would-be candidate is Sorena Sattari, the Rouhani administration’s Vice President for Science and Technology. The son of a late air force commander, Sattari is seen as someone who maintains ties on both ends of the Iranian political spectrum. Trained as a mechanical engineer, he is understood to maintain strong ties to the supreme leader’s office. But he is also seen as forward-looking and has won praise for his relentless support of the country’s start-up ecosystem, hardly a bastion of conservatism.

Sensing that a generational shift is underway in Iranian politics, conservative camps have also sought to elevate younger politicians. Now 40 years old, Mehrdad Bazrpash, began his political career at the age of 25 and has been ruthless in his criticism of the Rouhani administration, especially with regards to the state of the economy and efforts to normalize ties with the West.

But for all the appeals of youth, the old guard is not ready to step aside just yet. Within the reformist-moderate bloc that supported President Rouhani, debate continues about the candidacy of former parliament speaker Ali Larijani, one of the most powerful politicians in the history of the Islamic Republic, who underwent a transformation over the last decade from a conservative firebrand to a moderate figurehead. Rouhani owes much of the internal backing for the nuclear deal to Larijani.

Still, reformists remain divided about Larijani and his loyalties.  “The Reformists will not resort to a proxy candidate,” said Hamid-Reza Jalaeepour, a key voice in reformist circles. But other leading reformists, including Mohammad Atrianfar, consider Larijani the only viable candidate to continue the political project Rouhani began. In a recent interview, Atrianfar argued that Larijani had “significantly distanced himself from the hardline conservatives in recent years and insists on maintaining this distance.”

Parviz Fattah, an IRGC member and the head of the Mostazafan Foundation, one of the country’s largest bonyads, or charitable endowments, has also been touted as an attractive presidential candidate in hardliner circles. Fattah is seen as someone who, if not young himself, may be able to galvanize conservative-minded youth through his uncompromising ideological outlook.

With the economy looming large in the minds of voters, a theme of technocratic competence has also emerged much like the theme of youth. There is growing speculation that the governor of Iran’s central bank, Abdolnasser Hemmati, could come forward as a candidate, allowing the reformists and moderates to avoid some of the internecine tensions that would surround a Larijani candidacy. Hemmati’s performance at Iran’s central bank has not been without controversy, with some questioning his heavy-handed approach to the country’s turbulent foreign exchange markets. But he is broadly seen as someone who has reinstated the relative independence of Iran’s central bank, instituting policies that have eased some of the impacts of U.S. secondary sanctions.

In a similar vein, Mohammad Bagher Nobakht, the head of the country’s Plan and Budget Organization and a longstanding figure in Iranian economic policy, has fueled speculation about his own candidacy after several trips to Iranian provinces, which included campaign-style posters and press conferences. Nobakht has, nevertheless, dismissed speculation of his candidacy as “unfounded.”

But if the reformists and moderates are to recapture some of the enthusiasm that thrust Hassan Rouhani to two landslide election victories, charisma may be key. Hossein Kanani-Moghaddam, founder of the center-right Green Party of Iran, has suggested that the greatest hope for those wishing to preserve the political project begun under Rouhani comes in the form of Hassan Khomeini, the grandson of Ayatollah Rouhollah Khomeini, the founder of the Islamic Republic. The 47-year-old cleric is a close ally of the spiritual leader of the reform movement, Mohammad Khatami, but has largely stayed away from the political scene and has declined calls to run in past presidential elections.

Whomever the reformists and moderates put forth, the most difficult hurdle will be the vetting process carried out by the Guardian Council, a body dominated by conservative clerics. In a worrying sign, the council purged the majority of pro-reform candidates ahead of the February parliamentary vote, a move which contributed to the lowest turnout in any major election since the founding of the Islamic Republic.

Akbar Torkan, a veteran moderate politician and a former senior aide to Rouhani, believes that the presidential election will have much in common with the parliamentary polls, warning that the Guardian Council will “select the candidates on their own just to have the public approve them at the ballot box.”

Outspoken political scientist Sadegh Zibakalam has made an even more pessimistic predication, arguing that the “reform movement is over.” In his view, those who voted for Rouhani in 2017 have become disillusioned, contributing to low turnout.  “It’s not about names, even someone like Khatami cannot garner votes,” he said of the dwindling popularity of the reformist camp.

Zibakalam believes that a low-turnout election will favor a hardline figure who can mobilize his base, perhaps even Mahmoud Ahmadinejad, the controversial former president who refused to rule out plans for his candidacy in a recent interview. Ahmadinejad, who has cultivated a populist image by focusing on the grievances of Iran’s lower classes, has already begun touring the country, mustering large crowds that give credence to Zibakalam’s warnings.

Ahmadinejad was barred by the Guardian Council from the 2017 presidential race. But he is reportedly engaged in behind-the-scene talks with the vetting body to get the green-light for next year’s election “An Ahmadinejad candidacy could disrupt all the calculations,” said prominent conservative politician Morteza Talaee, noting that the ex-president technically belongs to no major camp after breaking away from the hardliners, who once supported him unequivocally.

Ahmadinejad’s national profile is matched by just a few other potential candidates—prominent political figures who continued to eye the presidency after failed bids.

Former Tehran mayor, Mohammad Bagher Ghalibaf, who was named the new parliament speaker in June, has failed to become president in 2005, 2013, and 2017. In recent years, Ghalibaf has cast himself as a conservative stalwart in an attempt to galvanize the new generation of “revolutionary” youth behind his leadership.

Chief Justice Ibrahim Raisi, who came second to Rouhani in the 2017 election is also expected by many pundits to be considering a second run. But another election defeat would dent Raisi’s hopes of becoming the country’s next supreme leader and he may wish to focus on the ambitious anti-corruption drive widely seen as a gambit to increase his chances of succeeding Khamanei.

Finally, Mohsen Rezaee, a former commander of the Islamic Revolutionary Guard Corps, who has already had three failed bids for the presidency, appears to be warming up for another fight. As a proponent of “resistance economy”, Rezaee has recently sharpened his attacks against the Rouhani government’s economic performance, including a slogan-like tweet issued last week. “I can give our people assurances that by pushing aside the pro-Americans from power … our national currency will become the strongest in the entire region,” Rezaee declared.

Iranian voters have a long wait to see who will appear on their ballots. But the crowded field makes it clear that Iran is set to have a watershed election, one that will combine a likely shift away from progressive reformism with the potential emergence of a new generation of political leaders.