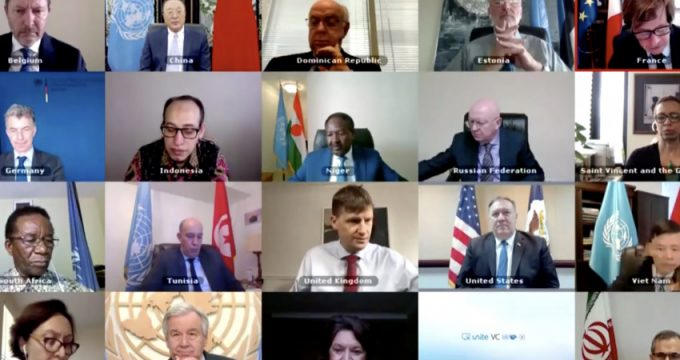 Anatomy of US failure at UN: Smart Iranian diplomacy

Iranian Diplomacy | Kaveh L. Afrasiabi: A clue to the growing isolation of US in the international community with respect to Iran, the Trump administration’s attempt to impose a permanent arms ban on Iran and to reintroduce the UN sanctions against Iran has fallen on deaf ears at the UN, in large part due to Iran’s skillful diplomacy. Thus, despite a spirited campaign by US Secretary of State Mike Pompeo and other US officials, per the report of New York Times, the Trump administration’s draft Security Council resolution on Iran has been “rebuffed” and could not even get the minimum votes to come up for a vote.

Undoubtedly, this represents a major setback for US’ “maximum pressure strategy” on Iran that nowadays seeks to extend its tentacles to United Nations and thus once again instrumentalize this international organization for its illegal purposes against Iran, as it has on several occasions in the past. Confronted by a consensual opposition by the other permanent and non-permanent members of the Security Council, the US strategy has actually backfired on Washington, reflecting an altered global environment that is simply sick and tired of US’ on-going rogue behavior bullying other nations.

At the same time, the Security Council’s refusal to become an uncritical sounding board for Washington’s designs on Iran, at a time when it remains silent on the illegal annexation of the West Bank by the expansionist Israeli regime backed by the White House, is a hopeful sign that there is still a semblance of international norms and principles left in the international community despite three years of havoc wreaked by the Trump administration.

In analyzing the roots of US’ failure at the UN, the role of Iran’s skillful diplomacy stands out as a major contributing factor that alone sheds much light on the importance and relevance of soft power diplomacy in the contemporary global affairs. Thus, credit must go to both Iran’s Foreign Minister Javad Zarif and Iran’s permanent representative to UN, Majid Takht Ravanchi, for spearheading a superb timely and effective counterpunch to the American demarche that, in effect, reeked of superpower arrogance. These Iranian diplomats were successful in neutralizing the draft resolution by relying on the elements of a persuasive diplomacy that targeted for deconstruction of the fundamental flaws and distortions of the US position, thus rendering the latter as indefensible by the standards of communicative rationality.

Complementing their well-crafted statements at the UN, the Iranian officials also used public diplomacy, e.g., by ambassador Ravanchi’s teleconference with the members of media, highlighting Iran’s record of cooperation with the IAEA, the factual errors of American allegations, and the unlawful US departure from the parameters of UNSC 2231, mandating compliance with the Iran nuclear accord, which has been shredded by the Trump administration. In addition, Iranian diplomats were able to coordinate their action with other JCPOA parties, such as Russia and China, which representatives submitted letters of opposition to the US initiative to the Council.

Even the European governments, which have been repeatedly disrespected by Trump and his subordinates, as confirmed in John Bolton’s new book, remained unmoved by Pompeo’s appeal, knowing full well that in doing so they would be breaching their JCPOA obligations. Intent on salvaging the deal, the principal European governments, namely, France, Germany, and UK, continue to thread a fine line that is fraught with risks, all the more reason not to cave in to Trump administration’s pressure to put the deal to rest, which is contrary to Europe’s fundamental security interests. Europe as a whole if fed up with this rather insane US administration and, logically speaking, no European leader ought to do anything to boost Trump’s re-election chances by helping him to score on the foreign policy front. Indeed, Trump has little to show on this front and also on the domestic front, roiled by pandemic-induced economic meltdown and racial protests, completely undeserving a second term from the prism of US national interests. Trump’s Iran policy has been a complete failure and the setback at the UN is not, in fact, unrelated to the growing unpopularity of the non-constructive maximum pressure strategy, reflecting a US hegemony on the decline.

Still, it is a sure bet that the US government will not relent the game and will almost certainly continue its effort to sabotage the JCPOA and to impose the “snapback” sanctions on Iran, requiring Iran’s readiness to continue its “smart diplomacy” that represents a major asset for the country.