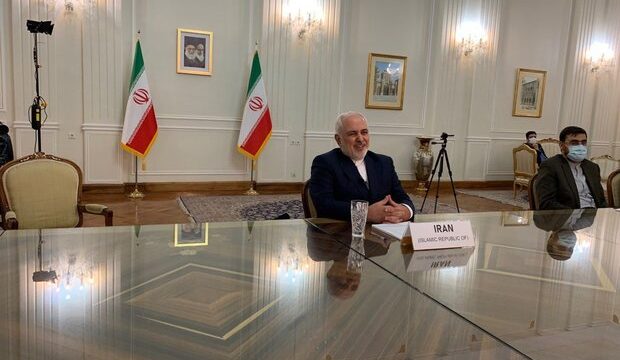 MNA – Iran’s Foreign Minister Mohammad Javad Zarif on Tuesday urged the UN Security Council (UNSC) to adhere to the “rule of law” in making its decision on Iran’s nuclear deal.

“The int’l community in general – and UN Security Council in particular – face an important decision: Do we maintain respect for rule of law, or do we return to law of the jungle?” Zarif tweeted after making his virtual address to the UNSC meeting on Tuesday.

The top diplomat’s tweet came after US Secretary of State Mike Pompeo on Tuesday urged the UNSC to extend an arms embargo on Iran that expires in October.

Under the UNSC Resolution 2231, which endorses the Iran nuclear deal, the arms embargo on Iran will be lifted in mid-October. Tehran said it would not accept the renewal of the embargo.

Earlier in the day, Zarif delivered a speech during the online UNSC session, stressing that if this Council falters again, it will be a generational setback for the cause of multilateralism and the rule of law.

He said that and yet, not a single Council session has been convened to reprove the US Government, or to at least investigate its repeated violations, adding that instead, some European members of the Council are contemplating further undermining the Resolution and the Council while further reneging on their own JCPOA commitments.

“To cover this up, the US has—with some of its enablers—pressured the Secretariat to adopt a perverse reading of Resolution 2231—rejected by 3 JCPOA Participants, which is the polar opposite of the clear affirmation by the Security Council “that conclusion of the JCPOA marks a fundamental shift in its consideration of this issue,” Zarif reiterated.

In spite of our strong and legitimate objections to the historic mistreatment of Iran by the Security Council—particularly throughout 8 years of aggression by Saddam Hussein, as well as in the course of the unnecessary nuclear crisis—Iran showed its good faith by engaging in negotiations to reach a diplomatic solution as called for by all Security Council Resolutions on the nuclear issue, he said.

“In spite of all this, our remedial measures have until now had no impact on the IAEA’s monitoring and verification of our peaceful nuclear program, thereby making any proliferation risks irrelevant. Indeed, Iran’s peaceful nuclear program remains subject to the ‘most robust’ inspection regime in history. From 2016 through 2019, over 92 percent of the Agency’s total comparable global inspections were carried out in Iran,” Zarif said.

“The United States has carried out numerous acts of armed aggression against Iran and its neighbors; invaded our neighbors 3 times in the last 3 decades; milked the region of its resources through destabilizing arms sales; systematically supported terrorists and provided material support for crimes against humanity in Yemen. The peoples of our region have had enough of the malign US presence, and demand its termination. The bitter irony here is that most Americans also want their troops returned home, where they belong,” he said.

“This very regime absurdly accuses Iran of “meddling” in its own region. Yes. Of course, we want to partner with all our neighbors to create a strong region that precludes the emergence of hegemonic aspirations, by any power—regional or global. A strong region that requires homegrown political and territorial stability. And a strong region for which all neighbors need to exercise strategic self-restraint. It was to this end that, the President of the Islamic Republic of Iran put forward the Hormuz Peace Endeavor—HOPE. And we can do it. Without US meddling some 6000 miles away from its shores,” Zarif said.

As specified in the letter of the President of the Islamic Republic of Iran to the leaders of remaining JCPOA participants on 8 May 2019, any new restriction by the Security Council is against the fundamental commitments made to the Iranian people. In such a scenario, Iran’s options, as already notified to the remaining JCPOA participants, will be firm. And the United States and any entity which may assist it —or acquiesce in its illegal behavior—will bear full responsibility, he said.

The unlawful US unilateral withdrawal from the JCPOA and the re-imposition of its sanctions entail the US responsibility under the UNSCR 2231, UN Charter and applicable international law. The United States has also disregarded the decision of the International Court of Justice, he said, noting that The United States must fully compensate the Iranian people for all damages it has inflicted upon them—appallingly, for no reason other than to satisfy domestic constituencies and personal aggrandizement.

“While the Islamic Republic of Iran has shown—in words and deeds—our desire and preference for constructive engagement, we do not depend on others for our security, stability or prosperity. We have learned to solely depend on ourselves. That is why more than 40 years of US pressure—whether through demonization or war, sanctions or terror—including the cowardly assassination of our region’s counter-terrorism hero, General Qassem Soleimani—has failed to “bring Iranians to their knees” or affect our people’s decision-making calculus.”

For my final words, let me again borrow from Prime Minister Mossadegh’s speech before the Security Council in 1951: “The Council will not have failed to note the cogency of our arguments to the law. Yet, this is not a legal body, but primarily a political body charged with the highest political responsibilities. It will readily understand therefore, that we will not be coerced whether by foreign governments or by international authorities.”