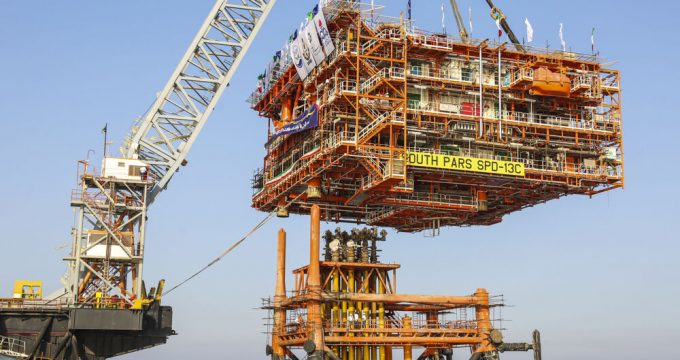 SHANA — As Iran’s Petropars starts developing Phase 11 of the giant South Pars gas field with a view to making first recovery in 2021, Iran would be soon completing development of all phases of this offshore field which it shares with neighboring Qatar.

Now, in a bid to guarantee sustained production from South Pars that supplies more than 75% of Iran’s gas, pressure fall-off in coming years has to be avoided.

Mohammad Meshkinfam, CEO of Pars Oil and Gas Company (POGC), has said developing other fields in the Persian Gulf would help avoid a sudden drop in the South Pars production rate in coming years.

Reservoir pressure fall-off and reduced output in South Pars is unavoidable in coming years. Therefore, POGC, which is tasked with developing Persian Gulf gas fields, has to remedy the situation. Apart from South Pars; North Pars, Farzad A, Farzad B, Golshan, Ferdowsi, Kish and Belal are the fields that POGC is tasked with their development. However, the point with developing all these blocks is that some of them are jointly-owned with other countries and therefore maximum recovery from them would be highly significant for the Petroleum Ministry. Sustainable production for at least 25 years has to be guaranteed from now.

National Iranian Oil Company (NIOC) envisages a short and a long-term solution to prevent pressure fall-off in the reservoir and guarantee sustainable production in the South Pars field.

Acid job, perforation, workover of wells, drilling new wells, and laying new pipes between platforms are among short-term solutions, while concentration on the development of blocks surrounding South Pars is a long-term solution.

Based on the planning made, the  gas produced in Belal field whose development agreement was signed with Petropars last year, and the gas produced in Phase 1 of the Kish gas field would be transmitted to the platforms of SP12 to offset possible production cut in this phase.

Until 2013, Iran was producing below 300 mcm/d of gas from its sector of the joint field. However, Iran brought its production to 700 mcm/d by 2019. Relying on this volume of production, Iran did not have to worry about any gas supply cut in recent years. The country even envisaged exporting gas and producing liquefied natural gas (LNG).

Pressure fall-off is a natural phenomenon. Preventive measures are needed now. Drop in production in this field; however, may not be tangible enough.

Gas recovery from south Pars is based on the gas expansion mechanism. In other words, gas production from this reservoir would be synonymous with a gradual decline in the reservoir pressure, which is natural in all gas reservoirs. However, such natural and sustained decline in the gas pressure would continue until it reaches the minimum pressure needed for the transfer of gas from sea to onshore refinery. After that, due to the impossibility of any further decline in pressure, gas production will start falling until the well stops producing.

Meshkinfam said that pressure fall-off started ever since production began in all South Pars platforms.

Except for Platform A and Platform C of SP12, its gas production currently stands at 82 mcf/d and 230 mcf/d, respectively.

When new platforms of SP11, SP13, SP14 and SP22-24 come online, the initial drop will not be tangible, but after five years, Iran will reach a point where such decline in output would matter.

Pressure fall-off in SP12 will be faster than that of other phases. Like many other oil and gas fields, South Pars is a non-homogenous field with its own specific reservoir thickness and features. In the central parts of the field, gas layers are thicker, while the reservoir rock is more suitable for gas storage and transmission. However, as we approach the phases closer to the reservoir, the gas column will become less thick while the reservoir features will be weaker. On the basis of this rule and based on information gained from the appraisal wells drilled in SP12, it was forecast from the very beginning that production from the platforms of this phase would happen in a shorter period of time.

SP12 was officially inaugurated in 2014. It has since been producing gas. However, Meshkinfam has said as gas production from Platform C of SP12 is nearing its end, this platform would be detached from this current location to be installed in SP11 in 2021. Furthermore, the gas produced at SP12 would be transferred to the onshore refinery of this phase through connecting this platform to the existing offshore pipeline.

Meshkinfam has reiterated that the remaining seven wells would be drilled after the operation of production platform so that the envisaged 1bcf/d output would materialize.