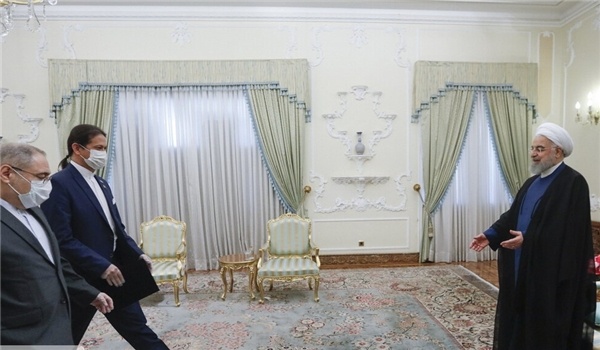 “The Islamic Republic of Iran is a model of bravery and resistance for people of Nicaragua vis-à-vis the US bullying,” Lenin Brawoujin said after submitting his credentials to Iranian President Hassan Rouhani in Tehran on Wednesday.

He added that Iran is a friend and brother country for Nicaragua,adding that Managua will do its best to develop bilateral relations.

During the meeting, President Rouhani underlined Tehran and Managua enjoy many commonalities and stances.

“Iran has many common stances with Nicaragua as a pioneer country in Latin America,” he added.

The Iranian president said that the two countries have always had friendly and intimate relations and they should do their best in line with the development of all-out cooperation.

In a relevant development in December, Iranian Foreign Minister Mohammad Javad Zarif and his Nicaraguan counterpart Denis Moncada in a meeting in Doha discussed bilateral relations and the situation in Latin America.

During the meeting in the Qatari capital on the sidelines of Doha Forum, Zarif and Moncada underlined the need for broadening of mutual cooperation in different fields.

The two foreign ministers also discussed the political developments in the Central and Latin American countries.