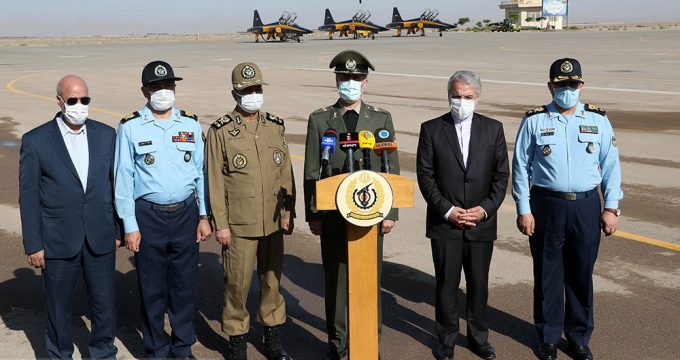 To improve its defense power, Iran does not need arrogant powers’ permission: min.

MNA – Iranian Defense Minister Brigadier General Hatami said Iran does not need the permission of the arrogant powers for developing its defense sector.

He made the remarks in a ceremony of delivering three domestically-manufactured fighter jets to Army Air Force.

“Unwise US officials have forgotten that the Islamic Republic has been able to maximally improve its defense sector under the toughest sanctions in the past 40 years,” he said.

He noted that Iran has seized the sanctions as an opportunity to improve its defense sector.

Brigadier General Hatami hailed efforts made by the country’s military experts to produce the jets amid the COVID-19 pandemic, and said, “Alongside the development of this aircraft, we have gained great achievements that are very valuable for the country”.

Various knowledge-based companies and universities of the country are cooperating with the military experts, the minister said, adding that the country would soon produce more advanced aerial equipment.

The domestically-made fighter/trainer jet ‘Kosar’, mainly developed by the Iran Aviation Industries Organization, was unveiled back in July 2017 and showcased to an international audience at MAKS air show in Moscow.

The twin-engined, two-seat Kosar jet successfully ran through test-flights on August 21, 2018, in the presence of President Hassan Rouhani. The event was part of the programs planned to commemorate Iran’s Day of Defense Industry, during which the president was scheduled to deliver a speech.