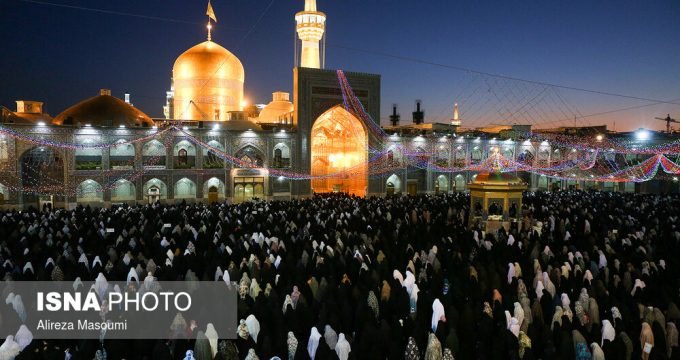 Bloomberg | Pico Iyer: Reading and writing about Iran could not prepare Pico Iyer for the warm, modern society that greeted him.

Our burly driver in the baseball cap kept his eyes on the road as my unfailingly suave guide, Ali, chatted away. We’d barely left the holy metropolis of Mashhad, in northeastern Iran, on our way to the small, ancient town of Tus, and already Ali was discoursing on flowers and mystics and philosophers and empire. Other than a quick hello, our driver, perhaps 60, said not a word. It would be almost an hour before we reached our destination: the quiet tomb of Iran’s beloved chronicler, Ferdowsi.

Only seven hours earlier, I’d arrived in the country whose poems and carpets had fascinated me since boyhood. Much of me wasn’t even here yet, since I’d landed in Mashhad at 2:20 a.m. after 30 hours of flights from Santa Barbara through Los Angeles and Istanbul. But Ali, educated in a boarding school near London in the 1970s, was wide-awake enough for two. As we passed billboards featuring stern proclamations from his country’s rulers, Ali kept talking about his culture’s love of veils. The more he said, the less I could tell where he stood on the 1979 revolution that had overturned his life.

Finally we arrived at the imposing mausoleum, honoring the poet who had fashioned the 60,000-couplet historical epic Shahnameh, or Book of Kings. Our driver, a veteran of the Iran-Iraq war, I guessed, with his large head and bulked-up frame, opened the back door for me with characteristic courtesy. Inside, a few local couples paid silent respect as Ali drew my attention to marble friezes depicting scenes from the ­thousand-year-old poem. Ferdowsi, he explained, had given Persia a voice—sung Farsi into fresh existence—much as Shakespeare and Cervantes had done in their countries. Rumi might be better known in the West, but for Iranians, Ferdowsi was the one who had given the land its identity.

Out of nowhere, we saw that our driver was standing by the tombstone. He took off his cap—his large head was bald—and set his hand on the marble. Eyes closed, he began to deliver lines from the Book of Kings in a resonant, haunting baritone that might have been mourning the death of a parent. Everyone in the place stopped, transfixed. When he finished he put on his cap again and said to me, in perfect English, “I’m so glad I could do that. I was diagnosed with throat cancer seven months ago and advised by my doctor not to sing. But when I come to the tomb of Ferdowsi, how can I not burst into song?”

In many of the countries I’ve visited, that moment would have been the highlight. But in Iran it was just one in an hourly succession of vertiginous surprises that humbled me as I crisscrossed the land for 16 days in September 2013.

I’d landed in Mashhad to find the airport’s parking lot teeming with revelers, seated on carpets as they passed around sweetmeats and cups of tea. “Iranians,” Ali had said, “are world champions when it comes to picnics.” By chance, I learned, I’d arrived the week 7 million of the Shia faithful were flocking into the city to celebrate the 1,247th birthday of Imam Reza, the saint buried in its central shrine.

As we nosed through the crowded streets in the predawn dark, my urbane guide started describing a Jon Stewart sketch he’d recently enjoyed and pointing out passersby who looked like Mr. Bean. I’d never guessed that Mashhad would be lined with high-rising banks, less Delhi than Dubai. I hadn’t expected the lobby of my luxury hotel, left over from before the revolution, to be filled with young women in hijabs, in clouds of Chanel or Dior, tapping away on smartphones. And when Ali advised me that I need change only $40 for my entire stay, I couldn’t have imagined that he was erring on the generous side. Iran’s economy was so shattered, tragically, that a foreigner could buy everything for nothing.

In the age of information, Iran reminded me, we often know less about the world than ever before, and least of all about the countries we hear about most.

I travel, in part, out of curiosity about the places that always feature in our headlines. I visit Haiti and El Salvador and Kashmir because I long to give a human face and voice to what would otherwise be mere abstractions. But Iran was proving more intriguing than anywhere I’d seen.

Stretched out on a divan in a garden hotel, surrounded by fairy lights and the smell of honeysuckle, I could see why British newspapers sometimes choose Iran as the world’s best tourist destination. I’d long known that the word “paradise” has its roots in Iran. What I hadn’t known is how vividly the country’s tradition of sensuous refinement still flourishes.

Later on, in Tehran, I passed squadrons of women, hijabs barely containing their blond highlights, enjoying aerobics to the accompaniment of boomboxes. Near Persepolis, Ali and I stopped at a caravansary being turned into a romantic boutique hotel. In Isfahan, razor-sharp kids piled into a place called Kentucky House for fried chicken, and bookshops featured pirated copies of Walter Isaacson’s then-recent Steve Jobs biography. The sound of the clerks, English-fluent and pungent as Brooklyn, made me wonder where I was.

The political oppression and economic suffering of the people were impossible to ignore, but at every turn I was reminded why I’d been warned, as an American, to be ready for more sophistication than I’d know what to do with. When friends of friends swept me off to lunch at a ­cutting-edge arts complex, all the talk was of Daniel Day-Lewis and Antigone.

I’d once spent four years of my life researching everything I could find about the culture and history of Iran, to publish a 354-page novel partly set there. I’d explored Yemen and Oman and Israel, as well as Syria and Lebanon and Jordan, so I thought I knew something of the neighborhood. But within 24 hours it was clear that I didn’t know a thing.

In the age of information, Iran reminded me, we often know less about the world than ever before, and least of all about the countries we hear about most. We read so often about Tehran’s hostile leadership, its nuclear program, its demonstrations, but almost nothing of the daily life of its 84 million people. I’d never heard of the mango and lemon malt beverages I saw on sale wherever I looked, or the place mats depicting Santa Claus. From now on, I’d try never to underestimate the depths of my ignorance and trust only what I saw myself, even when it meant flying back into North Korea.

And that first day, beginning with the trip to Tus? After a few hours, I slipped away from Ali, pleading jet lag. Longing for unchaperoned sightseeing, I went to the hotel taxi desk, where I met a young man with a small car and a boyish smile.

As we emerged from the thronged burial place of Imam Reza—my driver’s eyes bright with tears—he told me, in details I couldn’t doubt, that he was about to return to his blonde English wife in Yorkshire. Some years before, he’d gained legal asylum in Britain, having paid a human trafficker $2,500 to smuggle him there in the back of a truck. Yet having risked his life to flee Iran, he was now risking it again by stealing into the country every summer, to visit the hometown, the mother, and the mosque he missed so profoundly.

I’ve been lucky to travel incessantly for 45 years, from Bhutan to Easter Island and Ethiopia. I’ve spent years returning to Cuba and Tibet and Japan to try to unriddle their complications. But after Iran, I realized I’d never find anywhere more unexpected or rich—so painfully difficult for its residents, so gloriously inexhaustible for its visitors.

Pico Iyer is the author of 15 books, including last year’s twinned releases, Autumn Light and A Beginner’s Guide to Japan, about his longtime adopted home.