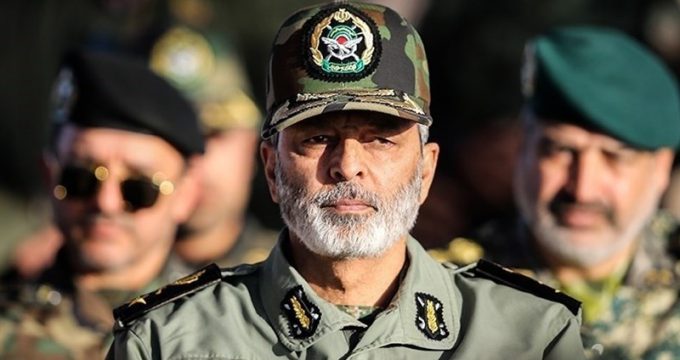 Tasnim – Iran’s Army Commander Major General Abdolrahim Mousavi warned the enemies that any threat to the country’s national interests will result in reciprocal threats to their own interests.

Speaking at a military gathering on Wednesday, the Army commander said Iran will reciprocally threaten the interests of any enemy that dares to threaten the Islamic Republic’s national interests.

He also said that the Army has prepared “practical schemes for the possible scenarios” and is practicing those plans overtly or covertly, separately or in combination.

Highlighting the close interaction and coordination between the Army and the Islamic Revolution Guards Corps, the general said, “The Army and the IRGC are prepared to combat any possible threat together.”

He further unveiled plans to furnish the Army, Navy, Air Force and Air Defense with new equipment by the end of the current Iranian year (March 2021).

The general further pointed to a recent military exercise that the Navy launched in the Sea of Oman, saying missiles with pinpoint accuracy and a range of 300 kilometers were successfully tested in the war game.

Last week, Iran’s Navy launched the naval combat war game in the Sea of Oman and the northern parts of the Indian Ocean and tested new short-range and long-range cruise missiles manufactured by the Iranian Defense Ministry.

The long-range naval cruise missiles hit the targets at a distance of 280 kilometers. The range of the new homegrown missiles may be extended.

A variety of coast-to-sea and sea-to-sea missiles with short and long ranges were fired simultaneously from the coastal launchers and the deck of naval vessels, and they could successfully detonate the targets with great accuracy.