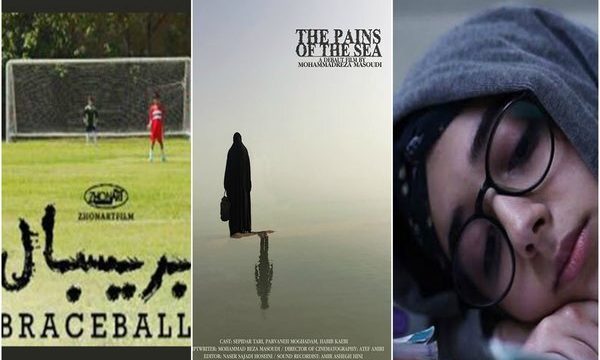 Iran Review – Three Iranian short films, namely ‘Braceball’, ‘Don’t Worry’ and ‘The Pains of the Sea’ will take part in the 4th Ramsgate International Film and TV Festival in the UK.

Written and directed by Reyhane Mortezaeinia, ‘Braceball’ narrates the story of a young boy with a disability, who loves soccer and makes every effort to have his dream come true in spite of his physical limitations.

‘Don’t Worry’ by Mana Pakseresht, narrates the story of a teenager who is alone at home on her birthday due to self-quarantine. Though, her mother who is a nurse and is in the hospital has a surprise for the girl.

Directed by Mohammad Reza Masoudi, ‘The Pains of the Sea’ is about Syrian and Iraqi immigrants who are trying to cross the sea to reach Turkey. A mother must choose between the life of her child and her own life in the sea.

Due to coronavirus, this year’s festival is largely taking place online from June 10. The June event is also extending its activities throughout the rest of the year both in Sheffield and virtually.

The three Iranian documentary films “Gracefully” directed by Arash Es’haghi, “Galena” by Ezzatollah Parvazeh and “The Art of Living in Danger” by Mina Keshavarz will be screened at the event.

Iranian film “Just 6.5” directed by Saeed Roustaee will be screened at the 21st edition of Jeonju International Film Festival in South Korea.

“Just 6.5” represents Iran in the category of Cinemafest of the Jeonju International Film Festival.

Feature films from the UK and Germany, along with three Japanese films will also compete in the category.

The Kraków Film Festival praised Iranian documentary “Sunless Shadows” with the award of the student jury and the Silver Horn for the director of the film on social issues.

“Sunless Shadows” is about an Iranian juvenile detention center in which adolescent girls serve sentences for the crime of murdering fathers, husbands or male family members. The all-female prison is also a shelter from an aggressively male-dominated society. Through frank conversations and playful interactions, the girls open up about the consequences of, and sometimes the reasons for, their action.

The documentary has already won awards such as the best director award at International Documentary Film Festival in Amsterdam and honorable mention at Big Sky film festival in the US.

Five Iranian short films will be screened at the 26th edition of Palm Springs International Short Festival in the US.

The five Iranian short films “Exam” directed by Sonia Hadad, “Tattoo” by Farhad Delaram, “The Visit” by Azadeh Mousavi, “Funfair” by Kaveh Mazaheri and “The Manchador” by Kaveh Tehrani will take part in the festival.

The festival is considered as a gateway for the Academy Awards nomination.

Iranian film ‘Among the Hills’ directed by Mohammad Reza Keivanfar has been awarded at the fourth edition of MENA Short Film Festival in The Hague, the Netherlands.

‘Among The Hills’ won the Feature Film Award at the festival which was held on June 11-13.

The film is about the adventures of a teacher named Amir. Amir enters a strange border area. He is supposed to teach in a nomadic school. This school is an old bus with no students which is rented by the Education Office. The bus owner comes to take the bus. Amir enters nomadic life and asks the parents to help him keep the school. He notices the problems of nomadic women and children and faces self-immolation, poor health, ethnic intolerance, and hard living conditions for girls in the region. Due to the difficult circumstances, Amir must decide whether to continue his efforts or return to the city.

The film has also been screened at five other international festivals in South Korea, China, Canada, Sweden and France.

Iranian animation “This Side, Other Side” directed by Lida Fazli will vie at the fourth edition of Hong Kong Kids International Film Festival (KIFF).

The animation shows some kids from the two sides of a borderline that make friends and play games with one another.

Hong Kong Kids International Film Festival is going online this year! With the current pandemics, the festival has decided to have a smaller scale film festival on its official social media platform this summer.

Lida Fazli has made the short to convey the message that no border can limit friendship and love.

She emphasizes the fact that the love and kinship that exist between the kids is so pure and innocent that nothing can destroy it, even the dark shadow of war.

The 16th edition of the Resistance International Film Festival announced that it will allocate a special section to films on health workers this year.

The organizers asked filmmakers and artists around the world to submit their short, documentary and animation films, music videos and motion graphics before the deadline of August 20.

The category named “Health Defenders” has been established in honor of the medical workers on the front line of the campaign against COVID-19.

An exhibition of photos and posters on the medical workers will be also organized on the sidelines of the festival, which will take place in Tehran from September 21 to 27.

The festival is organized every year to commemorate the anniversary of the 1980-1988 Iran-Iraq war.