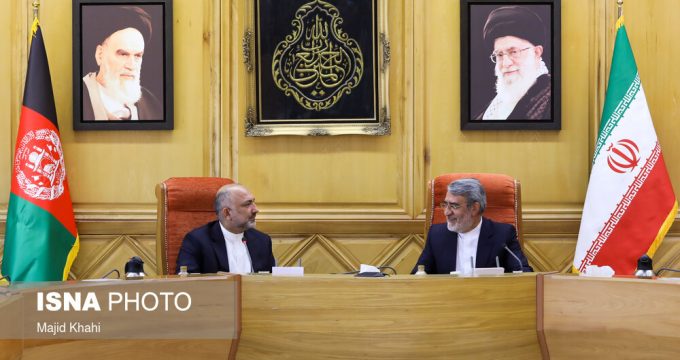 ISNA – Iran’s Minister of Interior, Abdol-Reza Rahmani Fazli held a meeting with the acting Minister of Foreign Affairs of the Islamic Republic of Afghanistan Mohammad Hanif Atmar on Monday.

During the meeting, the two sides discussed the issue of Afghan citizens in Iran and the joint comprehensive cooperation document.

Rahmani Fazli said that top diplomats of Iran and Afghanistan have agreed on Sunday to finalize the joint comprehensive cooperation document within three months.

The joint comprehensive cooperation document is an important issue for Iran and Afghanistan, he said, adding that it was prepared around five years ago and covers political, security, economic, cultural and social spheres.

Referring to the recent unfortunate events for Afghans, Rahmani Fazli stated that the governments of both countries should try to remove all obstacles in the way of legal traffic and facilitate it so that Afghans can enter to Iran through fully legal and protected routes.

The Interior Minister noted, “The issue of Afghan citizens and how they commute into Iran was another issue raised in the meeting. Mr. Atmar also stressed and thanked that the Islamic Republic of Iran has had good cooperation in this regard for 40 years and it was decided that the governments of both countries to try to remove all obstacles that are in the way of legal commute and facilitate legal cross-border movements of our Afghan brothers to enter our country through completely legal and supported routes, and that they can do their job with more confidence”.