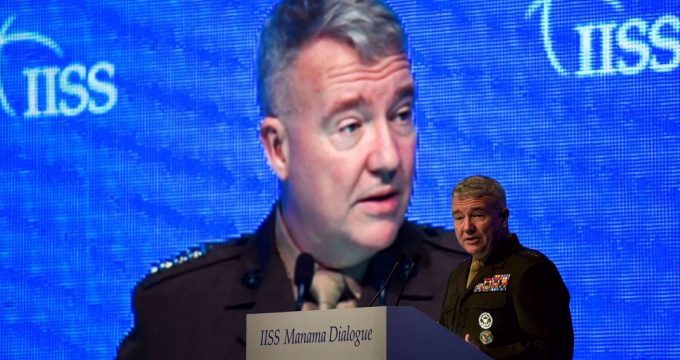 Threatened with expulsion, US general tries to scapegoat Iran: Sources

Press TV – A senior US commander conjures up a raft of unfounded accusations against Iran to evade the spotlight that had turned on him after the exposure of his attempts at leading Washington’s policy of reinvigorating Takfiri terrorists in Iraq, according to media reports.

Recently, US Marine Corps General Kenneth F. McKenzie Jr., commander of the US Central Command (CENTCOM), accused Iran of being behind attacks against Saudi Arabian oil facilities last year and the American forces deployed to Iraq.

He also claimed that the Islamic Republic had sent advanced military equipment to Yemen’s Houthi Ansarullah movement and was providing financial support for the government of Syrian President Bashar al-Assad.

Recently, however, some media reports said informed sources have revealed the circumstances surrounding the official’s verbalization of the accusations, through which he was only trying to deflect attention from revelation of Washington’s destabilizing efforts.

McKenzie recently met with the American Ambassador to Baghdad Matthew Toler in the Iraqi capital, according to the reports.

No one was supposed to find out about the meeting. The matters discussed were expected to be protected under an even stronger shroud of secrecy, given their incendiary nature.

However, it was leaked that the duo were discussing Washington’s plans to help a team-up between the remnants of the Daesh and al-Qaeda terrorist groups in Iraq by helping the outfits iron out their differences and making up for what they lack in terms of financial and logistical resources.

Such collaboration would destabilize Iraq, thus apparently justifying prolonged presence of the US-led forces in the Arab country.

In early January, the Iraqi parliament voted in force in favor of legislation mandating the withdrawal of all US-led forces. The vote came after the United States assassinated senior Iranian and Iraqi anti-terror commander, Lieutenant General Qassem Soleimani and Abu Mahdi al-Muhandis, among others in a drone attack against Baghdad.

Ever since, the White House is widely reported to be scrambling to extend the US-led presence.

The sources said McKenzie fired the anti-Iran claims to make headlines that would deflect attention from revelation of the contents of his meeting with Toler, after being taken to task by the White House for the leak and threatened with expulsion.

Daesh, the deadliest and most notorious Takfiri terror group to ever take shape, attacked Syria and Iraq in 2014 amid the chaos that was fueled by years-long US-led invasions throughout the Middle East.

The US again led scores of its allied states that year into an operation targeting the countries that Washington claimed was aimed at uprooting the group.

The US-led coalition’s intervention, however, did not stop Baghdad and Damascus from seeking the assistance of their allies, including Iran, which provided them with military advisory support.

The allies defeated the group in late 2017, but the US-led coalition retained its presence under the pretext of fighting off Daesh’s remnants.