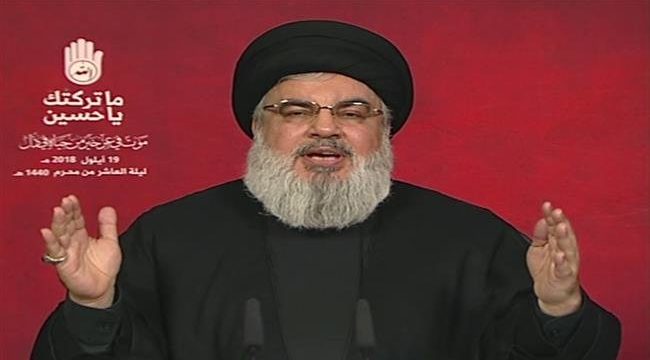 Nasrallah highlights failure of US sanctions on Syria

Tasnim – Hezbollah Secretary General Seyed Hassan Nasrallah censured the US sanctions against Syria, stressing that they have failed to achieve their desired results.

In a televised speech on Tuesday on the martyrdom anniversary of the sixth Shiite Imam, Imam Ja’far Sadeq (AS), and the demise of former leader of the Palestinian Islamic Jihad movement Ramadan Shallah, Nasrallah said the restrictive measures are the “last American weapon” to pressure the government in Damascus and that Syria’s allies would not leave the Arab country alone in the face of the economic war.

The Hezbollah chief said the latest US sanctions on Damascus under the so-called Caesar Act is the last weapon Washington has used against Syria after it failed to topple the country’s legitimate government militarily and Damascus emerged victorious in the nine-year war.

The new US sanctions against Syria, which will be implemented on June 17, is to target businesses and economic institutions that support the government of President Bashar al-Assad.

Stressing that the US sanctions have failed to achieve their desired effects, Nasrallah called on the Lebanese government “not to succumb to the Caesar Act” as the sanctions aim to impoverish and bring about hunger to the people of both Lebanon and Syria.

“Syria’s allies who stood by it during the military, security and political war— and even if their own conditions are also difficult— they will not give up on Syria in the face of this economic war,” he underlined, Press TV reported.

US blocking foreign currencies into Lebanon

Nasrallah also accused Washington of trying to worsen the economic situation in Lebanon by blocking the flow of foreign currencies into the country, saying Hezbollah would do all in its power to prevent violence and sectarianism in Lebanon.

“Under the pretext that dollars are being collected in the [Lebanese] market and being taken to Syria, the Americans are preventing dollars from coming to Lebanon, even what is in the hands of the Lebanese central bank for the Lebanese market,” he said.

“It’s the responsibility of all political and religious powers to prevent our country from descending into chaos, and avoid any political or sectarian sedition,” he added.

Nasrallah also hailed all reconciliation efforts among different political parties in Lebanon, saying such efforts should be encouraged and devoid of any politicization.

Lebanon has been facing an economic downturn since last autumn. The Lebanese pound, which has continued to plummet against the US dollar, hit a new low on Thursday, going down about 70 percent from its official rate.

Lebanese protesters resumed demonstrations last week, demanding the resignation of the ruling elite over mismanagement of the acute financial crisis as the novel coronavirus pandemic and the resulting lockdown compound the economic hardship gripping the country.

The protesters called for early Parliamentary elections and tougher measures to fight corruption and return the looted state funds.

Elsewhere in his televised address on Tuesday, Narallah also lashed out at political parties that raised the issue of disarming the Lebanese resistance movement Hezbollah.

“The ways some political forces follow in order disarm the resistance are useless, they should provide alternatives,” he said. “Resistance arms, for our people, are part of our culture, strategic doctrine, and deeper than others can imagine.”

Hezbollah has played a critical role in the Syrian military’s counter-terrorism operations over the past years with the aim of preventing the spillover of the Syria crisis into Lebanon.

The US has labeled the entire Hezbollah a terrorist organization and levied several rounds of sanctions on the Lebanese resistance movement as well as its top officials.

Moreover, the resistance movement’s popularity for shattering Israel’s myth of invincibility among the Arab public opinion has worried Israel and the West.

The movement’s military engagement in the Syria war has also turned it into a seasoned force, forcing many Western observers to describe Hezbollah as the most powerful Arab “army”.