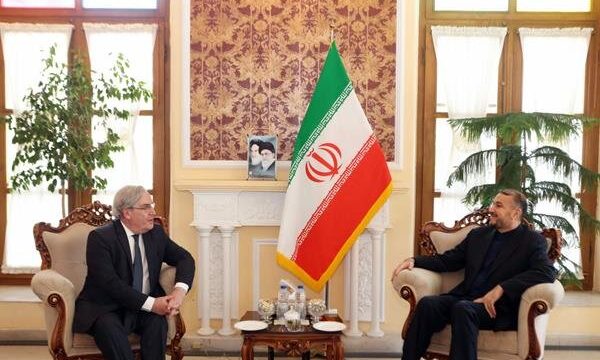 MNA – Iran has once again censured the unilateral American sanctions that have hampered humanitarian supplies into the country, renewing a call for the European Union to take a stand against such illegal US moves.

Iranian Parliament Speaker’s Special Aide for International Affairs Hossein Amir-Abdollahian met with French Ambassador to Tehran Philippe Thiebaud on Tuesday. During the meeting, he reiterated Iran’s call on the European sides to stand against the US unilateralism which is “clear violation of human rights”.

In May 2018, US President Donald Trump unilaterally withdrew from the 2015 nuclear deal and re-imposed illegal sanctions on Iran. Bowing to US pressure, the EU3 — the three European signatories to the nuclear deal — has failed to protect Tehran’s business interests under the JCPOA against the American bans.

The official also pointed to the long history of Tehran-Paris relations, saying that the Islamic Republic expects France not to allow a third country to undermine such cooperation.

“The development of relations between the two countries, especially in the parliamentary arena, has an effective role in increasing the level of interaction between us,” he noted.

Amir-Abdollahian also expressed his condolences to the people of France and the families of the victims of the coronavirus, adding that the two countries’ health departments could work together to control the deadly pandemic.

Thiebaud, for his part, referred to Iran’s significant role in helping ensure stability and security in the region, saying that “France welcomes the development of friendly relations with Iran in various fields, especially parliamentary relations.”

He also expressed his country’s readiness for consultation and cooperation Iran in line with solving the regional issues, including the fight against terrorism, stressing that boosting parliamentary ties could greatly contribute to this cause.