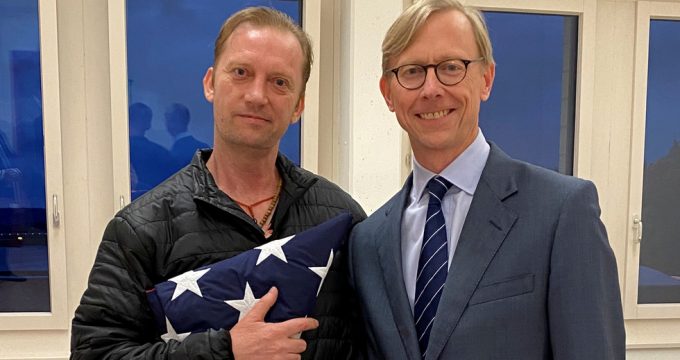 RT – US President Donald Trump has praised Tehran for releasing US Navy veteran Michael White, who was sentenced to 10 years in prison in 2018, hinting at a breakthrough that may pave way for a new nuclear deal.

“I just got off the phone with former American hostage Michael White, who is now in Zurich after being released from Iran. He will be on a U.S. plane shortly, and is COMING HOME to the United States,” Trump tweeted on Thursday evening, before giving credit to the Islamic Republic for its cooperation in the process.

Thank you Iran, it shows a deal is possible!

White was taken into custody by Iranian authorities back in June 2018, when he was visiting his girlfriend. The California native, who served 13 years in the US Navy, was then sentenced to a decade in prison, charged with insulting Iran’s Supreme Leader Ali Khamenei and sharing a private photo on social media.

As the Covid-19 outbreak swept through the country, the Iranian government ordered thousands of inmates to be sent home in a bid to curb the pandemic.

White was one of some 85,000 prisoners that were temporarily freed from jail, and remained in custody at the Swiss Embassy in Tehran until this week.

A total of 164,270 people have tested positive for the coronavirus in Iran as of Thursday, with authorities warning about a “second wave” of the deadly disease amid an uptick in new cases.

Trump’s rare praise for Tehran comes as the tensions between the two countries continue to run high.

In May 2018, the US quit the landmark nuclear pact signed with Iran three years prior – formally known as the Joint Comprehensive Plan of Action (JCPOA) – leaving it hanging in the balance and threatening other parties to the deal with sanctions in order to torpedo efforts to salvage it.

Just last week, Secretary of State Mike Pompeo said that Washington would be terminating almost all remaining waivers (with only one exception) for its sanctions against Iran in connection with several civilian facilities. This means that European, Chinese and Russian companies working on nuclear projects in Iran will have two months to wrap up their operations or face US wrath, which will come in the form of punitive measures. In the case of the civilian nuclear reactor in Bushehr, the US said the wind-down period would be 90 days to “to ensure safety.”

In addition to stifling Iranian nuclear program, Washington has ramped up economic pressure on Tehran in line with its goal to reduce the nation’s oil exports to zero. As a mini-flotilla of Iranian tankers loaded with gasoline set sail to Venezuela’s ports late last month in defiance of the US sanctions, the Venezuelan ambassador to the UN said that the Latin American country faced “the threat of imminent use of military force by the United States,” which opposed the shipment. Washington, however, did not make any moves to hamper the delivery, although there had been reports that it was considering retaliation.