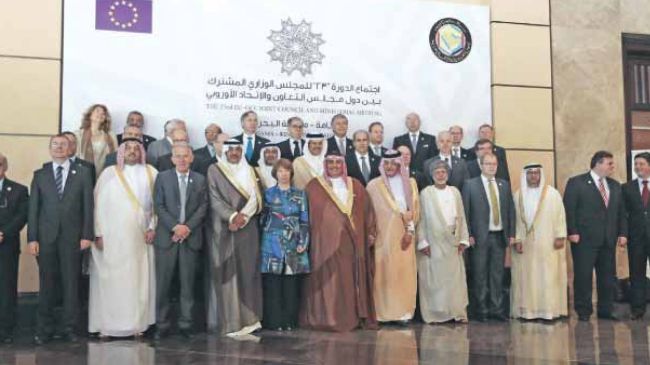 Iranian Diplomacy | Fatemeh Salehi: The Persian Gulf Cooperation Council nowadays, instead of focusing on ‘cooperation’, has turned into a hotbed of tension among Arab countries.

The Council has so far failed to settle any disputes among its member states, the most important example of which is the crisis in Qatar which involves the four Arab states of the Persian Gulf.

The Council consists of six countries, including Saudi Arabia, the United Arab Emirates, Kuwait, Qatar, Oman, and Bahrain. It was formed on May 25, 1981, at a meeting in Riyadh and the initiative of Jaber al-Ahmad al-Sabah, the Emir of Kuwait at the time. Al-Sabah made the proposal to fill the so-called “vacuum” left in the wake of Britain’s withdrawal from the Persian Gulf.

The primary purpose of the Council was to strengthen unity and establish joint coordination among member states in all fields.

Although Saudi Arabia and the UAE, Bahrain, and Egypt have cut ties with Qatar and imposed a siege on the country for nearly three years under the pretext of Doha’s support for terrorism, the Council has failed to take any positive steps in this regard.

It is a matter of great surprise to see this level of dispute among countries that otherwise share such deep roots in their language, race, religion, income, resources, as well as familial and social ties.

The Qatar Crisis and No Hopeful Prospect for Its Settlement

The Qatar crisis is one of the worst crises to be ever presented to the Persian Gulf Cooperation Council since its establishment.

The Council, then headed by Abdullatif bin Rashid Al Zayani, (who was recently succeeded by former Kuwaiti Finance Minister Nayef al-Hajraf after 10 years), announced in November 2017, five months after the siege of Qatar, that it was unable to settle the crisis and the solution was in the hands of the leaders of the member states.

In the early days of the Qatar crisis, U.S. President Donald Trump sought to resolve the crisis as soon as possible by holding talks with Qatari and Arab officials, because he considered tension and conflict in the camp of his Arab allies in the region as detrimental to Washington. Yet, despite all these consultations, as well as exerting pressure and leveling threats, nothing special happened to resolve the Qatar crisis.

It is safe to say that one reason for the continued persistence of disputes among the Council’s member states is that while the disputes remained between the Arab leaders and concerning their political consultations in the past, today these differences have reached among nations and concern the way they treat the so-called ‘enemy country.’ Regarding the crisis in Qatar, although many of the involved countries have deep-seated social, cultural, and family ties with Qatar, these political disputes have overshadowed these ties.

Of course, the serious dispute between Qatar and Saudi Arabia, the UAE and Bahrain did not originate in 2017. It was on March 5, 2014, when these Arab countries summoned their ambassadors from Doha and then, eight months later, announced an end to the disputes during a meeting in the Qatari capital.

However, about three years later, the countries resumed their disputes, which have persisted to this day. This shows that the disputes between these countries are not a superficial issue that could be settled through meetings or the signing of a reconciliation document.
This is while the Cooperation Council did not take any steps to end the Arab conflicts in 2014, and only Kuwait held the said meeting through diplomatic efforts.

The Cooperation Council and A New Crisis

In addition to the failure of the Persian Gulf Cooperation Council in reaching a political solution to the disputes among the member states, the Council may soon come to its end in the face of a new crisis.

Recently, Saudi Arabia has increased its value-added tax (VAT) rate to 15 percent from 5 percent in response to its financial crisis and as part of its austerity measures. This would mean the end of economic development and political coordination in the region, as the topic of economic measures and the adoption of unilateral trade policies between the member states is one of the main pillars of this Council.

Of course, in the past, there were more areas for economic cooperation between these countries than there were for joint security cooperation. The majority of member states believe that it is better to focus on joint economic cooperation rather than on foreign affairs or military issues because they have not been able to achieve any significant results in the latter.

For this reason, the Council member states have taken steps to further develop economic cooperation, from signing a free trade agreement to establishing a customs union and a common market, but these measures have faced some problems due to lack of production and services. The volume of trade transactions between the member states amounts to only 10% of the total volume of their non-oil trade. What’s more is the Council’s failure to join efforts to create an integrated monetary policy for the member states.

Even now, after Saudi Arabia’s move to raise taxes, the idea of coordinated customs measures seems highly unlikely. The future of the Council’s economic policy is wrapped in a veil of ambiguity in the face of the members’ competition in the fields of taxes, foreign investments, and the granting of citizenship to foreign nationals.

Other Disputes among the Member States

It is true that the Qatar crisis is the main point of dispute among the member states, but that is by no means the only difference worth talking about.

Oman has long been unhappy about Saudi Arabia’s military presence in al-Muhra province on Oman’s and Yemen’s shared borders. Furthermore, the Omani people were critical of the UAE’s acts of espionage against their country, and in 2019, Oman sentenced 5 Emirati people to prison on spying charges.

Meanwhile, Kuwait is trying to stay neutral on disputed cases but is being pressured by Riyadh and Abu Dhabi to take their side.

As for Yemen, we saw that some Arab countries, which were originally members of the aggressive Saudi-led coalition, gradually left the coalition after several years when the war and invasion of Yemen dragged on. Their withdrawal from the coalition angered Riyadh in some cases.

It is no secret to anyone that the Cooperation Council is ultimately under the control and dominance of Saudi Arabia, and any country that opposes Riyadh will be put under pressure from the Council.

When Abdullatif bin Rashid Al-Zayani was in power, he did not observe the principle of impartiality regarding the crisis in Qatar, and he always raised criticism against this country. The move was not unexpected given Saudi Arabia’s control of the Cooperation Council.
In his remarks, he always praised Saudi Arabia and its policies and ignored Riyadh’s efforts to create divisions and discord among the member states.

Al-Hajarf, Al-Zayani’s successor, seems to have followed suit. In his first comment on the Qatar crisis, he downgraded the enormity of the crisis to mere disputes between Arab countries. The move was faced with opposition from Qatar’s adviser on political affairs, who said that Al-Hajarf expresses the views of Saudi Crown Prince Mohammed bin Salman in the Cooperation Council and he should not reduce the crisis in Qatar and the siege of this country to mere disputes among Arab countries.

Saudi Arabia’s interference in the decisions of the Cooperation Council reached its peak when, in an unprecedented move, it prevented a Qatari minister from attending one of the Council’s meetings. According to the predictions of U.S.-based National Interest newspaper, Qatar, Oman, and Kuwait are unlikely to need Saudi Arabia’s presence in the Council’s next term, as the country has a long history of having adopted immature policies in light of its own turbulent domestic situation.

Saudi Arabia’s adventurous policies, in the wake of the rise of Muhammad bin Salman as a young and inexperienced prince, have cost the country its former position among the members of the Persian Gulf Cooperation Council.

Finally, it could be said that both the Arab League in Egypt and the Persian Gulf Cooperation Council in Saudi Arabia appear to have lost their place and effectiveness among the Arab nations, as they have made no progress in resolving the many Arab crises in recent years. The disputes among the Arab countries, in light of the policies of their leaders, will not be resolved except by a fundamental change in these policies.