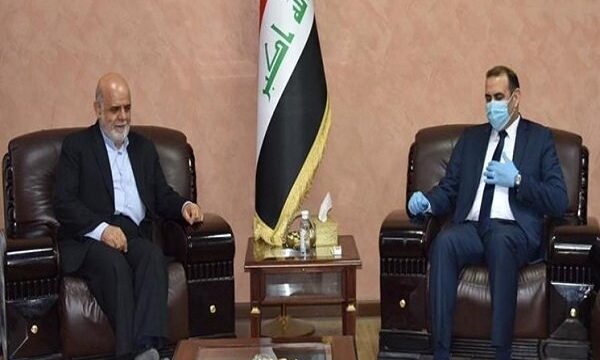 MNA – Iraqi Minister of Planning Khaled Najm Battal, in a meeting with Iran’s Ambassador to Baghdad Iraj Masjedi on Monday, hailed Iran’s support for Iraq in all the existing sectors.

In the meeting with Masjedi, Battal voiced his country’s tendency for expansion of ties with Iran.

The Iraqi minister’s office released a statement on Sunday, expressing Iraq’s tendency for boosting mutual ties with the Islamic Republic.

According to the statement, the two sides in this meeting conferred on cooperation between Iran and Iraq in the fight against the coronavirus, boosting trade, balancing levels of imports and exports, and cooperation on the energy sector, increasing cooperation between the two countries in the fields of science and research, organizing Iranian and Iraqi pilgrims, encouraging mutual investment, and providing the right conditions for Iranian companies to operate in Iraq and etc.

The Iranian minister, for his part, unannounced Iran’s support for Iraq in economic, medical, scientific, and investment sectors.

Masjedi said in spite of US pressures, the new Iraqi PM has a positive attitude towards the expansion of ties with Iran and has vowed to implement all the made mutual agreements.

The ambassador predicted improvement in Iraq’s conditions under Al-Kazemi despite its current political, economic, and coronavirus challenges.

He added that the US pressures will not works due to Iraq’s need for Iranian gas and electricity.
In a telephone conversation with al-Kazemi also in mid-May, Iranian President Hassan Rouhani voiced his country’s full support for the Iraqi government.