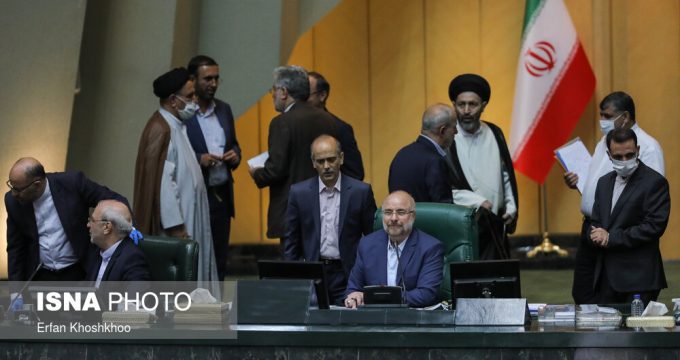 Tasnim – Iranian Parliament Speaker Mohammad Baqer Qalibaf highlighted the futility and harmfulness of negotiations with the US government, saying the Islamic Republic’s strategy entails a complete eviction of American forces from the region.

In an address to the legislature on Sunday, Qalibaf said the new Parliament regards the fight against the world arrogance as an ideological cause and a strategic interest.

The Parliament dismisses “negotiations and compromise with the US – the axis of global arrogance- as futile and harmful,” he added.

Qalibaf said Iran’s strategy in confrontation with the “American terrorists” is completion of the process of revenge for the assassination of top Iranian commander Lt. General Qassem Soleimani.

A full revenge will be taken when the “terrorist US army” is completely expelled from the region, he stated.

Qalibaf also reaffirmed the Parliament’s commitment to supporting the Palestinian nation, the Lebanese Hezbollah, Hamas, the Islamic Jihad, the oppressed people of Yemen, as well as the Iraqi government, nation and religious authorities.

The Islamic Republic has made constant progress in strategic areas and turned into a major regional power and an influential actor in the international arena, Qalibaf further stressed.

Iranian officials have repeatedly rejected the idea of direct negotiations with the US, stressing that Washington must first resume honoring its commitments under the Joint Comprehensive Plan of Action (JCPOA) and lift the sanctions on Tehran.

Leader of the Islamic Revolution Ayatollah Seyed Ali Khamenei has ruled out the notion that ‘settlement of Iran’s problems hinges on rapprochement with the US.’

Negotiation with the US will by no means solve Iran’s woes as Washington’s main objective is to hinder Iran’s progress, American officials are liar and deceitful, and, moreover, the US itself is plagued with crises, Imam Khamenei said in 2016.