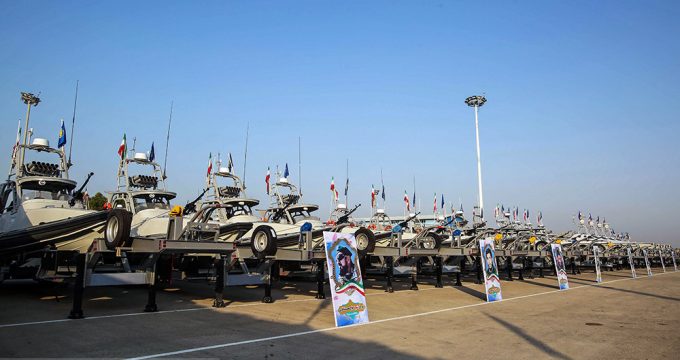 MNA – The unveiling of an Uncrewed Underwater Vehicle (UUV) by the Islamic Revolution Guard Corps (IRGC) Navy, while showing off Iran’s domestic capabilities, also sent another message to those countries which are trying to keep Iran away from any kind of advancement.

The newly-joined vessels came in various classes such as ‘Ashura’, ‘Tarogh’, and ‘Zolfaghar’, all manufactured and optimized by Iranian experts working at knowledge-based companies of the Ministry of Defense Marine Industries Group and specialized technical centers of the IRGC Navy.

These vessels, which enjoy high hydro-dynamic capabilities, high speed, suitable maneuverability, very low radar cross-section (RCS), and high offensive power, have a great impact on improving the combat capability of the IRGC Navy in the Persian Gulf and the Strait of Hormuz.

Among these various classes of vessels, however, there was one in particular that grabbed the attention of foreign news outlets. Based on the published photos, there is an Uncrewed Underwater Vehicle (UUV) among the unveiled vessels with an appearance of Ghadir-class submarine but smaller and without a command bridge.

This new vessel immediately grabbed the attention of Western media. The American magazine Forbes, for example, wrote in an article following Iran’s unveiling of its new vessels that Iran joined “an elite club with only the U.S. Navy and Britain’s Royal Navy having such large UUVs.”

Forbes further added, “A new vessel, shown in public for the first time this week, is either a very small submarine or a very large Uncrewed Underwater Vehicle (UUV). It appears to be the latter. If correct, this will add a new dimension to Iran’s systematic warfare capability. It will also mean that Iran joins an elite club with only the U.S. Navy and Britain’s Royal Navy having such large UUVs.”

According to the article, the Iranian UUV is comparable to the Boeing Orca extra-large uncrewed underwater vehicle (XLUUV), which is being developed for the US Navy.

The Boeing Orca XLUUV, named after the killer whale, is described as Extra Large Unmanned Undersea Vehicles that could be used for mine countermeasures, anti-submarine warfare, anti-surface warfare, electronic warfare, and strike missions.

Uncrewed underwater vehicles such as Orca will revolutionize naval battles and provide naval forces with low-cost, semi-disposable combat systems that can cover the gaps on the battlefield or easily navigate to locations that are impossible or dangerous for ships and crewed submarines.

Interpreting the motto ‘We Can Do It’

Mashregh News wrote in an article about the Iranian UUV, which it described as IRGC’s military surprise, that “given the size of the UUV, it could be predicted that the vessel could be used to carry a torpedo or used as a remote control platform to launch attacks from depths of the sea and create a tremendous explosion to sink heavy vessels.

The IRGC’s first try at developing uncrewed underwater vehicles was the ‘Ya-Mahdi’ speed boat, which according to the information stated in documentaries aired on national TV, was equipped with three rocket launchers and could also serve as a moving bomb at sea by carrying explosives and hitting the bodies of enemy ships.

In 2015, in an interview with Rear Admiral Sardar Fadavi, the then commander of the IRGC Navy (NEDSA), regarding the delivery of submarines into the Navy’s combat units, he said, “Hopefully by the end of the fifth five-year plan, which is nearly at its end, we will have finished the basic stages of this underwater vessel and have something ready to display.”

An image released at the delivery of high-speed vessels to the IRGC navy revealed that the IRGC has taken important steps in the field of submarines and it seems that the development of an uncrewed underwater vehicle that had been on the agenda has reached acceptable and operational results.

IRGC Chief Major General Hossein Salami had said in October 2019 that the country should take steps toward manufacturing uncrewed vessels, adding “making that achievement is possible given the knowledge we have.”

It should be noted that the new Iranian UUV is similar to Ghadir-class submarines, which have been developed for use in the depths of the Persian Gulf and Sea of Oman.

Although there is not much information about the new Iranian UUV, what can be said for sure is that the IRGC’s submarine program has successfully passed the design and the evaluation stage on computers and scientific hypotheses, and has now reached marine experiments.

With such systems coming on stream, the Islamic Republic, in addition to adding an important option to its defense structure, will join an elite club whose members could be counted on the fingers of one hand.

In addition to increasing the country’s defense capabilities, this new development also carries an important message: Despite all efforts to keep the Islamic Republic away from modern sciences and scientific progress, the Iranian youth, by relying on their own knowledge and capabilities, have been able to reach a position that even the largest weapons manufacturers of the world have not been able to reach yet.

As such, the invading and aggressive Western countries, which have deployed their warships in the Persian Gulf and the Sea of Oman under the pretext of providing security, will have another concern in addition to speedboats, and that is Iran’s uncrewed underwater vehicles.

Iran and Western countries, especially the United States and Britain, have had many confrontations in the Persian Gulf, and now, with the addition of the new vessels to Iran’s defensive forces, the developments in the region will definitely change, and it is even possible that the current level of presence of Western countries in the region will also go through some changes.

Furthermore, the Western countries, in particular the United States, which has repeatedly tasted defeat at the hands of Iran’s indigenous knowledge, especially in the field of drones, will now have another unmanned defense system to deal with.