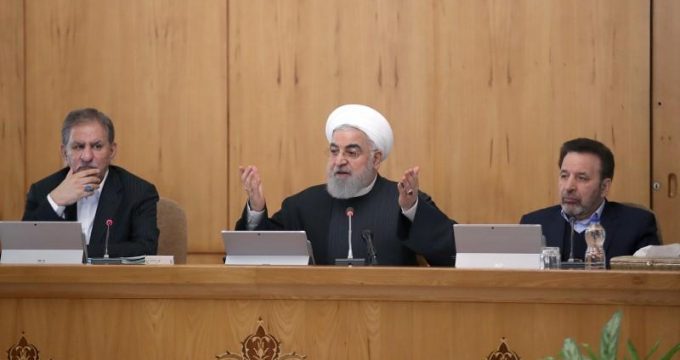 Iran-Venezuela trade has nothing to do with US: Rouhani

MNA – Iranian President Hassan Rouhani highlighted that the United States has no right to intervene in legal trades between independent states.

“Americans seek to intervene in a normal oil trade between two friend countries while this has nothing to do with them,” Rouhani said on Wednesday while speaking in a cabinet meeting.

The remarks come as three out of five Iranian tankers, laden with fuel, have already arrived in Venezuela.

Rouhani went on to say that unity among all Iranian officials and bodies has been key in defending national interests. “If there was no unity among the government, other branches, and armed forces, Americans could be successful in their aggression and we would see another Gibraltar incident in the Caribbean,” he said referring to the illegal seizure of Adrian Darya (Grace 1) oil tanker by the UK in July 2019.

The United States has criticized the shipment, as both OPEC nations are under sanctions. A US official said earlier this month that President Donald Trump’s administration was considering responses to the shipment, prompting the Iranian government to warn Washington against military action.

The five Iranian vessels carry an estimated total of 1.53 million barrels of gasoline between them.

Hassan Rouhani, Iran fuel shipment to Venezuela, US sanctions against Iran May 27, 2020
Some 56 more Iranians die from coronavirus over past 24 hours
Claim of torturing, detaining illegal nationals at Afghanistan borders ‘rejected’