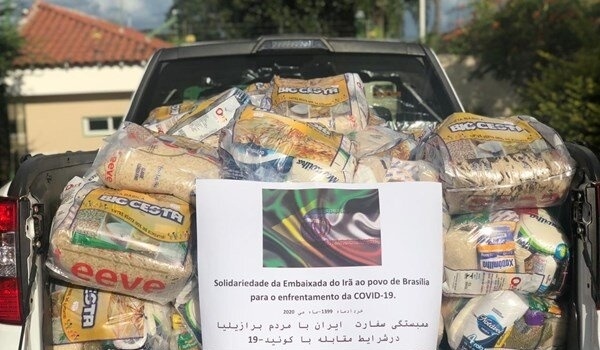 FNA – The Iranian mission in Brasilia distributed aid packages of foodstuff among the Brazilian people in a show of solidarity amid the coronavirus epidemic in the Latin American country.

The food packages were distributed among the needy people in line with the efforts to help contain the novel coronavirus outbreak in the South American country.

Brazil on Monday announced its death toll from the novel coronavirus climbed to 23,473, following 807 fatalities in a single day.

The total number of people who have tested positive for the deadly disease reached 374,898, with a mortality rate of 6.3 percent, according to the health ministry, as in the past 24 hours, 11,687 new cases of infection were detected.

Brazil’s Interim Health Minister Eduardo Pazuello warned towns in the interior of the country to brace for the pandemic, which has mainly ravaged Brazil’s larger coastal cities, such as Sao Paulo and Rio de Janeiro.

Interior cities need to prepare their healthcare networks for a wave of COVID-19 cases, including from smaller surrounding towns, he stated.

Brazil is entering the stage of the pandemic that will see “its dispersion somehow towards the interior”, he noted.

Brazil is the most affected country in Latin America, with its population close to 210 million. The first case and death due to the virus in the region were also reported in the country.

The virus epidemic already resulted in two health minister resignations in Brazil due to differences of opinions and other disagreements with the head of state, Jair Bolsonaro.

Hospitals in several areas are meanwhile operating close to full capacity, and the hardest-hit cities have begun burying victims in mass graves.

A coronavirus mortality model from the University of Washington’s Institute for Health Metrics and Evaluation (IHME) predicts more than 88,000 deaths from the coronavirus in Brazil by August.

As parts of the US and Europe moved to gradually ease social distancing measures and open certain economic sectors, Latin America’s largest nation has been emerging as the new hotspot of the coronavirus.

Health officials in Rio de Janeiro and other cities in Brazil warned of overwhelmed hospitals, morgues and cemeteries, while they started collecting bodies of victims who have died at home.

Health specialists fear COVID-19 – which is moving into poor regions, having initially affected middle- and upper-class areas – could wreak havoc on Brazil’s most deprived and vulnerable communities.

A leading medical journal described Bolsonaro as “perhaps the biggest threat” to Brazil’s ability to successfully fight the coronavirus pandemic.