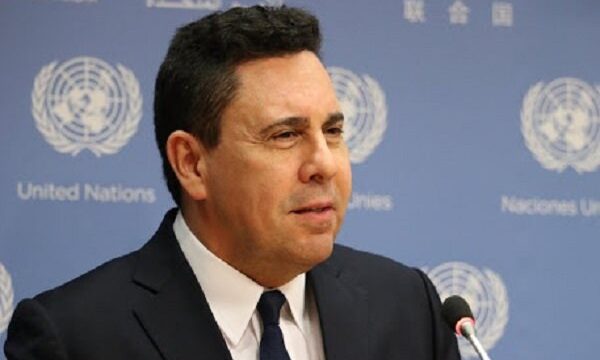 Press TV – Venezuela’s permanent representative to the UN has welcomed the arrival of Iranian tankers loaded with gasoline to the South American country’s waters, urging US President Donald Trump to avoid an act of aggression based on the “wrong advice” of warmongers.

In a series of tweets on Sunday, Samuel Moncada cited an open letter to Trump written by a group of 14 retired experts of the US intelligence community, who warned him against a military attack on the Venezuela-bound Iranian fuel tankers.

“The Iranian gasoline reaching Venezuela is a landmark in the struggle for sovereignty, independence and peace. Trump and his minions are thinking of a military attack against the tankers amidst the pandemic. His experts advise him otherwise,” he wrote.

Moncada also enumerated the arguments provided by the experts against any “unnecessary adventure” by the US against Iranian vessels, saying they believe that “the act of war does not serve US interests.”

Any such attack could trigger “unpredictable responses” and lead to “unprecedented situations” beyond US control, the Venezuelan envoy quoted the experts as saying.

He also referred to calls by Venezuela’s opposition leader Juan Guaido and his security commissioner Ivan Simonovis for a US move, saying Guaido has lost foreign and domestic support.

“Warmongering Generals & advisers in Washington are playing with fire in a dangerous situation and exploiting Venezuelan extremists. They are seeking a war with Iran in the Middle East contrary to US interest. They’ve have attempted this many times in the past,” Moncada wrote.

He further emphasized that Trump’s threats will not weaken Venezuelan President Nicolas Maduro but rather strengthen him and unify most of the nationals against aggression.

“In their long experience in defending the US, they do not understand how could attacking legal trade between two countries that do not pose a national threat serve their own interests. Venezuelans, meanwhile, want no war either, but dialogue,” he wrote.

Moncada said, “Trump’s policy thus far has been a failure and, even with the pandemic, it seems to have no chance of success in the near future. Avoiding a war resulting from the wrong advise of adventurers in Washington and Venezuela is the best option for the US.”

Also on Sunday, the Iranian embassy in Caracas posted a video of the tanker arriving at Venezuelan waters. “The first Iranian tanker reached the Venezuelan coasts. Grateful to the Bolivarian Armed Forces for escorting them,” it tweeted.

“Iran and Venezuela have always supported each other in times of difficulty,” Venezuelan Foreign Minister Jorge Arreaza tweeted. “Today, the first ship with gasoline arrives for our people.”

The shipments have infuriated Washington as both Iran and Venezuela are under illegal US sanctions.

The US recently beefed up its naval presence in the Caribbean for what it called an expanded anti-drug operation.

Washington has also threatened to take measures especially against Iran, according to a senior US official, who did not provide further details.

Iran’s President Hassan Rouhani on Saturday warned of retaliatory measures against the United States if it caused problems for tankers.