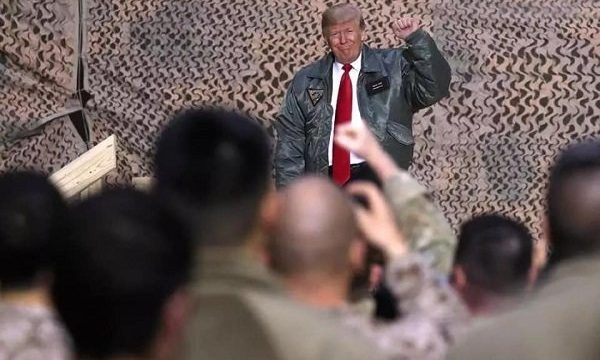 Trump failed to prove he’s a true anti-interventionist. If he wins again, we might see MORE wars

RT | George Szamuely: President Donald Trump, if he is re-elected in November and no longer fearing desertion of his anti-interventionist supporters, may well shed his remaining inhibitions against embarking on new military adventures.

A Trump second term, particularly if it is hamstrung by Democrats controlling both houses of Congress, is likely to be defined by an appetite for military intervention.

Back in 2016, Trump had run on an explicitly anti-interventionist platform. The United States, he reiterated, had to stop wasting money trying to solve the world’s problems.

Trump accused the Bush administration of lying about Iraq and declared that the Iraq invasion “started ISIS [Islamic State, IS], it started Libya, it started Syria… everything that’s happening started with us stupidly going into the war in Iraq.” He even suggested that Saddam Hussein could have been a useful ally against Islamic terrorism.

Trump ridiculed the Obama administration’s regime-change policy in Syria for backing the wrong side: “We are fighting Assad. And we’re fighting for people and helping people that we don’t even know who they are. And they may be worse than Assad.” Like Saddam, Assad could have been a useful ally of the United States: “I don’t like Assad at all, but Assad is killing ISIS. Russia is killing ISIS and Iran is killing ISIS,” Trump said during one of the presidential debates. On Libya, too, Trump repeatedly insisted that the world would be much better off were Muammar Gaddafi still in power.

However, the promised reorientation of US foreign policy never happened. Not only has there been no withdrawal from Iraq, Trump has threatened Iraq with sanctions should it insist on removal of American forces. Earlier this year, Trump announced that, as a condition of US departure, Iraq would have to reimburse the United States for money it had invested in an air base.

In Syria ‘to keep the oil’

There has been no departure from Syria either. Trump twice launched missile attacks on Syria, supposedly in retaliation for chemical-weapon attacks. On April 7, 2017, Trump hurled 59 Tomahawk cruise missiles at Al Shayrat airfield, where President Bashar Assad had allegedly launched his chemical attack on Khan Shaykhun from. “Years of previous attempts at changing Assad’s behavior have all failed,” Trump said. “As a result, the refugee crisis continues to deepen, and the region continues to destabilize, threatening the United States and its allies.” Trump repeated the exercise a year later, this time hitting some government storage facilities and a scientific research center. “These are not the actions of a man. They are crimes of a monster,” Trump said of the alleged chemical-weapon attack. In a tweet, Trump called Assad an “animal.”

Far from withdrawing troops from Syria, Trump now insists that they will stay indefinitely, ostensibly to secure Syria’s oil fields. “We’re keeping the oil. We have the oil. The oil is secure. We left troops behind only for the oil,” Trump said.

Defense Secretary Mark Esper has implausibly claimed the goal is to “deny ISIS access to oil revenue.” However, with ISIS defeated and controlling no territory in Syria, and with the US not exactly short on oil, it is obvious that the real goal is to deny the Syrian government “access to oil revenue” and thus the ability to rebuild its country – a regime-change policy by other means.

Trump has repeatedly threatened Iran with war. He withdrew from the Joint Comprehensive Plan of Action in 2018, and re-imposed sanctions on Iran. Through his ‘maximum pressure’ campaign, he has sought to deny Iran any revenues from oil sales. As if that were not enough, Trump ordered the assassination of Iranian Major General Qassem Soleimani, following that up with a warning that, should Iran retaliate, the US would strike “52 Iranian sites (representing the 52 American hostages taken by Iran many years ago), some at a very high level & important to Iran & the Iranian culture.”

….targeted 52 Iranian sites (representing the 52 American hostages taken by Iran many years ago), some at a very high level & important to Iran & the Iranian culture, and those targets, and Iran itself, WILL BE HIT VERY FAST AND VERY HARD. The USA wants no more threats!

Regime-change operations continue unabated. After seeking to topple the Venezuelan government of Nicólas Maduro through sanctions, Trump, in January 2019, announced that the United States would henceforth regard opposition leader Juan Guaidó as ‘interim president’ of Venezuela. As early as August 2017, Trump was threatening to use force against Venezuela. “We have many options for Venezuela, including a possible military option, if necessary,” Trump said at the time.

More recently, the Trump administration accused Maduro of engaging in “narco-terrorism,” claiming that his government had intended to “flood” the US “with cocaine and inflict the drug’s harmful and addictive effects on users in the United States.” The State Department offered a $15 million reward for information leading to Maduro’s arrest.

Nonetheless, Trump’s supporters and many commentators – by no means Trump defenders – point out that Trump, unlike his recent predecessors, has not started any new wars. “In fairness to” Trump, journalist Bob Woodward has argued, “he hasn’t started a new war.”

Trump, his supporters insist, is an anti-interventionist at heart; once he is re-elected, he will be able to enact fully the anti-interventionist agenda. Yes, Trump attacked Syria with ballistic missiles; but he did not escalate, as many neo-conservatives urged him to do. Yes, Trump has threatened Iran and even assassinated one of its leaders; but he did not escalate when Iran retaliated by launching a ballistic missile attack on Al Asad air base. Nor did Trump do anything when Iran shot down a US drone. Besides, look at his agreement with the Taliban, committing the United States to withdraw all forces from Afghanistan within 14 months!

Even the Afghanistan withdrawal is some way down the road, and conditioned on the Taliban supposedly living up to its commitments.

That he hasn’t escalated against Syria and Iran, that he hasn’t invaded Venezuela should be ascribed to Trump’s well-founded fear that the anti-interventionist supporters that had been so critical to his victory in 2016 would desert him in 2020.

In 2016, Trump succeeded in persuading them that he was one of them, though the evidence for this was thin. Contrary to his oft-repeated claims, Trump did not oppose the 2003 Iraq invasion. In 2011, Trump urged military intervention in Libya to remove Gaddafi:

Gaddafi in Libya is killing thousands of people, nobody knows how bad it is, and we’re sitting around. We have soldiers all over the Middle East, and we’re not bringing them in to stop this horrible carnage and that’s what it is: It’s a carnage… We should stop this guy, which would be very easy and very quick.

Even in 2016, Trump was defending his support for the use of force against Libya. He claimed that he had been in favor of surgical strikes: “You do a surgical shot and you take him out. But I wasn’t for what happened… It was handled horribly.”

Asked in 2015 whether he was fine with President Clinton’s 1999 military intervention against Yugoslavia over Kosovo, Trump happily answered: “It’s OK, sure.”

While Trump appeared to be arguing that Russia, Syria, and Iran were useful allies in the fight against ISIS, he was actually saying something different. Trump was accusing the Obama administration of empowering Russia, Syria and Iran: “I think you have to knock out ISIS… But Syria is no longer Syria. Syria is Russia and it’s Iran… Obama made [Iran] into a very powerful nation and a very rich nation, very, very quickly.” Much of Trump’s criticism of Obama’s Syria policy was focused on Obama’s ‘red line’ on Syria’s use of chemical weapons, and his failure to follow through: “Obama draws the line in the sand. It was laughed at all over the world what happened.”

Trump made a similar argument when it came to Russia. Obama had allowed Russia to get very strong, very quickly: “Our nuclear program has fallen way behind, and they’ve gone wild with their nuclear program.”

Trump’s withdrawal from the INF Treaty and his reluctance to renew the New START Treaty, due to expire in 2021, are thus perfectly in accord with his position during the 2016 campaign and with his true thinking.

Other than the familiar rhetorical flourishes during his rallies, Trump has given very little evidence that he is wedded to any anti-interventionist principles. The same of course is true of his almost-certain rival, former VP Joe Biden. Biden doesn’t even pretend that he has ever seen a US military intervention that he didn’t love.

For countries that have been in the US crosshairs for years – Syria, Iran, Venezuela, North Korea – the outlook following the November election isn’t a happy one. One possibility is they will be confronting an emboldened Trump who, freed from the constraint of having to worry about losing supporters, will give full vent to his interventionist instincts. The other equally unappealing possibility is they will be confronting a Biden administration that will be filled with Obama retreads, committed to Samantha Power-style ‘humanitarian intervention’ and to avenging 2016 by seeking out confrontation with Russia.