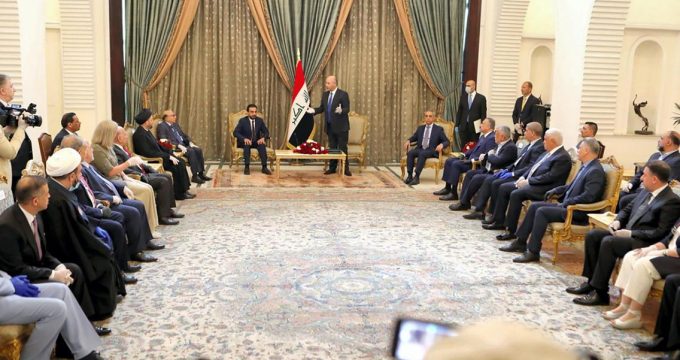 Al-Monitor | Ali Mamouri: Iraqi Prime Minister Mustafa al-Kadhimi is seeking to reorganize the Popular Mobilization Units under the framework of the PMU law.

Iraqi Prime Minister Mustafa al-Kadhimi faces a difficult task in implementing his reform plan for the Popular Mobilization Units organization and bringing its various military factions under full control of the Iraqi state. He has started approaching PMU leaders, but reining in the organization will not be an easy task.

In his first days in office, Kadhimi took a few actions against the PMU. He ordered security forces in the southern province of Basra to close the Thar Allah al-Islami militia headquarters and arrest its leaders for shooting at protesters; one demonstrator had wound up dead. Security forces also arrested Maytham al-Okaili, who is a prominent member of Saraya al-Khorasani, on May 21. Okaili was accused of forming a gang and being involved in abducting and blackmailing several citizens. Saraya al-Khorasani is one of the top pro-Iran factions in the PMU and is led by Sayyed Hamed al-Jazaeri. It is one of the militias that have been accused by protesters of having taken part in killing and abducting demonstrators.

Kadhimi visited the main PMU office May 16 to break the ice. He praised the PMU for its military campaign against the Islamic State (IS) after the Sunni militant group seized a large chunk of Iraqi territory in 2014. While IS no longer holds territory, it has started a new wave of terrorist operations in the country.