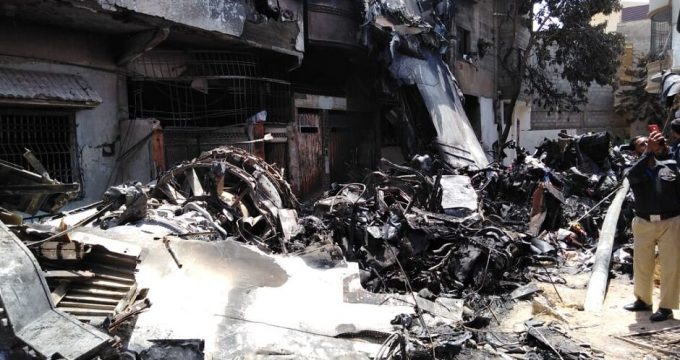 Those killed include 26 women, 68 men, and three children, however, two passengers survived and are being treated in the hospital.

The Airbus A320 was flying from Lahore to Karachi when it crashed in Karachi’s Model Colony destroying multiple buildings on both sides of a narrow street.

According to an initial report, the last check of the plane was done on March 21 this year and it had flown from Muscat to Lahore a day before the crash.

The report added that there was “no defect related to the engine, landing gear or major aircraft system”.

The federal government has constituted an investigation team to probe the crash.

In a press conference on Friday night, PIA Chief Executive Officer Arshad Malik said that the pilots and cabin crew aboard PK8303 were all qualified.

“Accidents happen, but our pilots are trained for these kinds of events. These planes have checks and balances that we are required to fulfill.

A Sample Collection Unit for DNA tests of plane crash victims and their families has been established at Forensic DNA Lab University of Karachi.

The crash occurred just days after the country began allowing commercial flights to resume after planes were grounded during a lockdown over the coronavirus pandemic.

On 7 December 2016, PIA flight from Chitral to Islamabad, operated by an ATR crashed near Havelian. All 48 people on board died.

On 20 April 2012, a Bhoja Air Flight from Karachi to Islamabad crashed in bad weather during its final approach to land in Islamabad killing 121 passengers and 6 crew members.