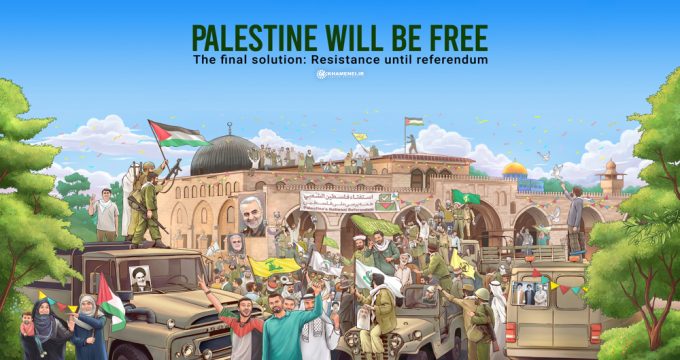 Zarif to US, Europe: Palestinians should not pay for your crimes, guilt

Press TV – Iran’s foreign minister has downplayed a recent spate of propaganda by Western media about a poster that appeared on the website of Leader of the Islamic Revolution Ayatollah Seyyed Ali Khamenei proposing “referendum” as the best way to end Israel’s occupation of Palestinian territories and the final solution to the issue of Palestine.

Since the publication of the said poster on Ayatollah Khamenei’s website on Wednesday, some Zionist-sponsored international media have been trying to draw an analogy between the term “the final solution” on that poster and the Nazi idea of extermination of Jews during World War II.

Some Western and Zionist officials also moved fast to come up with such baseless charges, most prominent among them being US Secretary of State Mike Pompeo and Israeli Prime Minister Benjamin Netanyahu, who went as far as threatening Iran with destruction.

Taking to his official Twitter account on Thursday, Iran’s foreign minister reacted to those unfounded accusations by describing them as “disgusting,” and adding that the final solution pointed to by Ayatollah Khamenei was a fair referendum attended by all original peoples of Palestine regardless of their ethnic and religious background.

“Disgusting that those whose civilization found a ‘Final Solution’ in gas chambers attack those who seek a real solution at the ballot box, through a REFERENDUM,” Zarif said, re-sharing the poster.

He further asked, “Why are US and West so afraid of democracy?” asserting, “Palestinians should not have to pay for your crimes, or for your guilt.”

The top diplomat was apparently referring to attempts by the West to make up for the alleged wartime crimes against Jews by trying to prop up and keep the Israeli regime on the map of the world at the expense of Palestinians’ rights.

The illegal regime came into existence in 1948 after expelling hundreds of Palestinians from their land during a Western-backed war. The regime occupied more Palestinian and other territories during another war in 1967 and has ever since been dotting the land with illegal settlements.

The West, at the head of them the United States, has also been invariably supporting the Israeli regime in its daily acts of aggression against the Palestinians and trying to shield Tel Aviv in the face of all international punitive measures.

Also on Wednesday, the English-language Twitter account, which is affiliated with the Leader’s website, further clarified the poster’s denotation, and the proposal for the referendum that has been forwarded by the Islamic Republic to the United Nations.

“A proposal for a referendum to choose the type of govt. for the historical country of #Palestine was registered with the UN as offered by Iran,” the account tweeted.

“We say the true Palestinians with Palestinian roots of at least 100 years, and Palestinians living abroad, choose the govt. of Palestine,” it added.

In another post, the Twitter account affiliated with the Leaders’ website mentioned a previous assertion by Ayatollah Khamenei in which he has clearly differentiated between “elimination of Israel” — an ideal first announced by the late founder of the Islamic Republic, Imam Khomeini — and, what the Zionist and Western officials and outlets are trying to describe as Iran’s ill-intention towards Jews.

“Eliminating the Zionist regime doesn’t mean eliminating Jews. We aren’t against Jews,” the post read, quoting a previous speech delivered by the Leader, adding, “It means abolishing the imposed regime.”

Abolition of the fake regime, the account noted, would allow Muslim, Christian, and Jewish Palestinians to “choose their own govt. & expel thugs like Netanyahu.”

“This is “Eliminating Israel” & it will happen,” it concluded.

The Iranian Foreign Ministry, meanwhile, retweeted Zarif’s post and asserted, “Fate of Muslim World is not decided by US & its regional allies.” It also emphasized that any initiative that would deprive Palestinian people of their territories would be unacceptable to Muslims and the world.

By “real estate developer,” the ministry was apparently referring to US President Donald Trump, who has come up with a hugely controversial plan in favor of Israel that he has ironically dubbed “the deal of the century.”

The scheme allows Israel to annex the Jordan Valley and around 30 percent of the West Bank, the Palestinian territory that it occupied in 1967.

In another tweet that came as Tel Aviv is trying to implement the annexation part of the scheme, the ministry said, “The American-Israeli ill-omened goal in the West Bank is facing global outcry,” adding, “Deterritorizing he #Palestinians is by no means acceptable.”