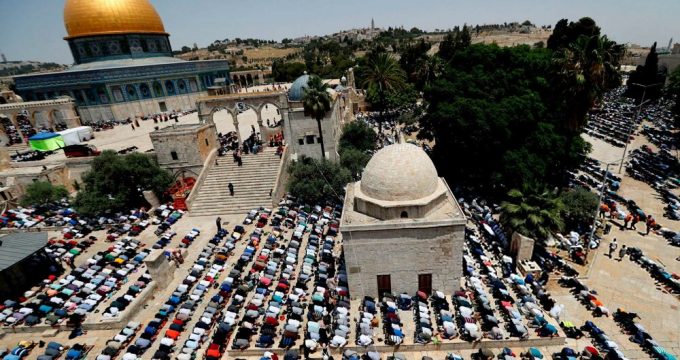 IRNA – Speaker of the Palestinian Legislative Council Aziz Dweik in a statement on the occasion of the International Quds Day described Iranian parliament’s act to ratify the formation of the virtual embassy in Palestine as an important step in line with stability and recognizing Quds as the capital of Palestine.

Iranian parliament’s measure stresses that sovereignty right belongs to Palestinians and the fact that Quds is the eternal capital of Palestine, the statement reads.

Dweik urged all Arab and Islamic states to take an action like that of Iran to oppose Trump’s decision.

Iranian Parliamentary Commission on National Security and Foreign Policy approved a plan on Saturday to oblige the Government when it comes into law to confront Israel’s hostile measures against the international and regional peace and security.

When the plan was passed in Majlis on May 12, Parliament Speaker Ali Larijani called on the related commission in the parliament to review the bill as soon as possible to prepare it for parliament’s agenda next week.

To follow up on the implementation of the anti-Zionist regime plan, a committee will be formed to present a report on the process of implementation every three months.

Each year, Islamic countries stage rallies on Wold Quds Day named by the father of the 1979 Islamic Revolution, Imam Khomeini, in Iran to express support for the Palestinian people.

Supreme Leader of the Islamic Revolution Ayatollah Seyyed Ali Khamenei is to make a speech on May 22, the Quds International Day.

Ayatollah Khamenei will speak to the Islamic World at 12:00 noon.

The speech will be covered live by TV and radio.