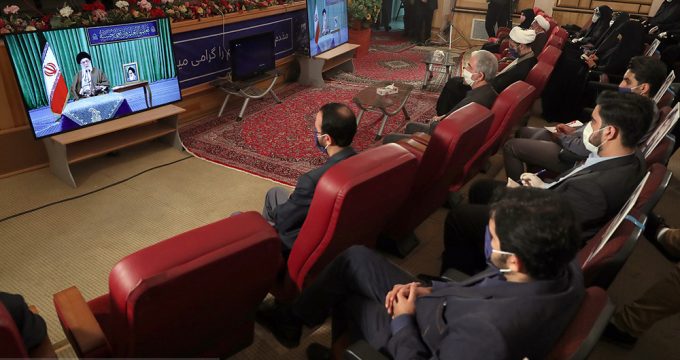 Ayatollah Khamenei: Americans support terrorists, will be expelled from Syria and Iraq

Press TV – Leader of the Islamic Revolution Ayatollah Seyyed Ali Khamenei says due to its support for terrorists, the US is hated in most parts of the world and will be soon expelled from Syria and Iraq, where it is illegally present in the two Arab countries.

Ayatollah Khamenei made the remarks while speaking in an annual Ramadan meeting with Iranian university students on Sunday, which was carried out through videoconferencing in the light of this year’s coronavirus pandemic and in compliance with health officials’ recommendations.

“The long-term performance of the United States, including warmongering, helping notorious regimes, harboring terrorist, [and] sparing no effort in supporting oppression, has caused this government to be hated in an important part of the world,” the Leader said.

Ayatollah Khamenei added, “Today, the American society and political system are not attractive, but are a subject of hatred in an important part of the world too.”

The Leader noted that part of the existing hatred for the United States emanates from the behavior of its current officials, including its president and its “talkative, illogical, and nonsensical” secretary of state.

Ayatollah Khamenei highlighted US warmongering in other countries, including in Afghanistan, Iraq and Syria as another reason why the US regime is hated so much.

“Americans explicitly say ‘we have sent military forces to Syria, because there is oil [in that country]’. Of course, they will not remain long neither in Iraq, nor in Syria and must certainly leave them and will undoubtedly be expelled [from those countries].”

Elsewhere in his remarks, the Leader touched on the country’s current situation from three different viewpoints, saying, “The Islamic Republic is currently engaged in a major struggle against the oppression and arrogance front.”

“The country enjoys a very high potential for confrontation [with the oppression and arrogance front] and past experience with different issues shows this to us,” Ayatollah Khamenei explained.

The Leader emphasized that the victory of the Islamic Revolution has “institutionalized a sense of power and dignity in our country and people.”

“Of course, the enemy is looking for an opportunity to strip us or our sense of national self-confidence,” Ayatollah Khamenei warned.