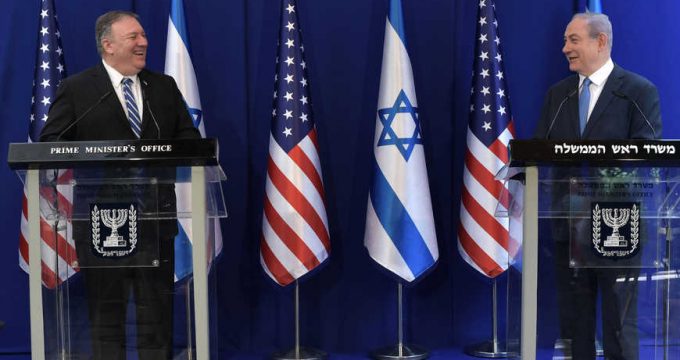 Netanyahu leaves annexation on back burner in talks with Pompeo

Al-Monitor | Rina Bassist: Prime Minister Benjamin Netanyahu made no mention of annexation in his press conference with Secretary of State Mike Pompeo, focusing instead on the pandemic, the US peace plan and Iran.

Prime Minister Benjamin Netanyahu and Secretary of State Mike Pompeo wrapped up a three-hour meeting in Jerusalem this morning, the day before the swearing-in of Israel’s new government. Greeting Pompeo upon his arrival, Netanyahu set the tone by introducing three main topics on the agenda: the global battle against the novel coronavirus, the Iranian threat and President Donald Trump’s proposed peace plan.

“The first thing is the plague. … The second thing is that there’s something else plaguing our region, which is unremitting Iranian aggression and terror. … The third point is that now we’re about to form a national unity government, tomorrow, I am — I think that this is an opportunity to promote peace and security based on the understandings that I reached with President Trump in my last visit in Washington, in January,” said Netanyahu.

Pompeo responded, “We’ll get a chance, too, to talk about the Vision for Peace. We’re now some months on from the day that you came to Washington when President Trump announced that Vision for Peace when you were there. There remains work yet to do, and we need to make progress on that.”