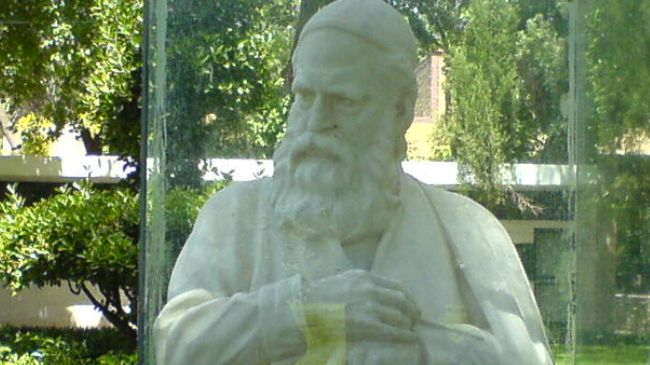 Omar Khayyam was born on 18 May 1048 in Nishapur, in northeastern Iran, and spent most of his life near the court of the Karakhanid and Seljuq rulers in the period which witnessed the First Crusade.

A literal translation of the name Khayyam means ‘tent maker’ and this may have been the trade of Ibrahim his father.

The political events of the 11th Century played a major role in the course of Khayyam’s life. The Seljuq Turks invaded southwestern Asia in the 11th Century and eventually founded an empire that included Mesopotamia, Syria, Palestine, and most of Iran. The Seljuq occupied the grazing grounds of Khorasan and then, between 1038 and 1040, they conquered all of north-eastern Iran. The Seljuq ruler Toghrïl Beg proclaimed himself sultan at Nishapur in 1038 and entered Baghdad in 1055. It was in this difficult unstable military empire, which also had religious problems as it attempted to establish an orthodox Muslim state that Khayyam grew up.

Khayyam studied science, philosophy, mathematics, and astronomy at Nishapur, and about the year 1068, he traveled to Bukhara, where he frequented the renowned library of the Ark. However Khayyam was an outstanding mathematician and astronomer and he did write several works including Problems of Arithmetic, a book on music and one on algebra before he was 25 years old.

In 1070 he moved to Samarkand in Uzbekistan where there Khayyam was supported by Abu Tahir, a prominent jurist of Samarkand, and this allowed him to write his most famous algebra work, Treatise on Demonstration of Problems of Algebra. It is presumed that due to his relationship with Tahir, ruler Shams al-Mulk distinctively regarded Omar with esteem.

Toghril Beg, the founder of the Seljuq dynasty, had made Isfahan the capital of his domains and his grandson Sultan Malik-Shah I was the ruler of that city from 1073. An invitation was sent to Khayyam from Malik-Shah and from his Grand Vizier Nizam al-Mulk asking Khayyam to go to Isfahan to set up an Observatory there and lead a group of scientists in carrying out precise astronomical observations aimed at the revision of the Persian calendar.

It was a period of peace during which the political situation allowed Khayyam the opportunity to devote himself entirely to his scholarly work. During this time the scientist measured the length of a year – tropical year length – with remarkable precision. The resulted calendar was named in Malik-Shah’s honor as the Jalali calendar and was inaugurated on March 15, 1079. The Jalali calendar was a true solar calendar where the duration of each month is equal to the time of the passage of the Sun across the corresponding sign of the Zodiac.

This calendar was used until the 20th century in Iran and it became the official national calendar of Qajar Iran in 1911. This calendar was simplified in 1925 and the names of the months were modernized, resulting in the modern Iranian calendar.

After the death of Malik-Shah and his vizier in 1092, Khayyam fell from favor at court and funding to run the Observatory ceased, and Khayyam’s calendar reform was put on hold. Despite being out of favor on all sides, Khayyam remained at the Court and tried to regain favor. He wrote a work in which he described former rulers in Iran as men of great honor who had supported public works, science, and scholarship.

He was then invited by the new Sultan Sanjar to Marv, possibly to work as a court astrologer. Sanjar created a great center of Islamic learning in Marv where Khayyam wrote further works on mathematics. He was famous during his life as a mathematician.

‘A commentary on the difficulties concerning the postulates of Euclid’s Elements’, ‘On the division of a quadrant of a circle’ and ‘On proofs for problems concerning Algebra’ are among his surviving mathematical works.

Outside the world of mathematics and astronomy, Khayyam is also best known as a result of Edward Fitzgerald’s popular translation in 1859 of nearly 600 short four-line poems the Rubaiyat.

Khayyam’s fame as a poet has caused some to forget his scientific achievements which were much more substantial. Versions of the forms and verses used in the Rubaiyat existed in Persian literature before Khayyam, and only about 120 of the verses can be attributed to him with certainty.

The poems celebrated the pleasures of life while illuminating the nuanced political and religious context in which they were created. Of all the verses, the best known is the following:

The Moving Finger writes, and, having writ,

Moves on: nor all thy Piety nor Wit

Shall lure it back to cancel half a Line,

Nor all thy Tears wash out a Word of it.

He also considered himself intellectually to be a student of Avicenna. There are six philosophical papers believed to have been written by Khayyam. Philosophy, jurisprudence, history, mathematics, medicine, and astronomy are among the subjects mastered by this brilliant man.

Khayyam died in Nishapur at the age of 83, on December 4, 1131. His mausoleum is a modern monument of white marble erected over Omar Khayyam’s tomb located in Nishapur. Although the tomb witnessed many calamities, it is not ruined and can host avid tourists from around the world.

In 1934, the reconstruction of the mausoleum was commissioned and Hooshang Seyhoun, who was the supervisor of national monuments constructions with Hossein Jodat, transferred the place of the tomb, and this process continued till 1962. The triangular parts of around the tomb are associated with a tent that implies Khayyam’s name.

The Mausoleum of Khayyam is one of the most important buildings of that period in terms of creativity, construction, and architecture. This monument was registered in the list of National Heritage in 1963.

Ordibehesht 28 in the Persian calendar corresponding with May 17 or 18 is the commemoration day of the world-renowned Persian poet, astronomer, and mathematician Omar Khayyam. Every year, a number of literati and scholars from around the world convene at the mausoleum of Khayyam to mark his National Day.

A ceremony is traditionally held on this day in his mausoleum in Nishapur, as well as in many other locations across the country and worldwide.

This year, several organizations have arranged webinars, meetings, and programs to commemorate Khayyam Day due to the outbreak of the coronavirus around the world.